Next Week Marks the Start of the Most Dangerous Three Months for Tornadoes in the U.S.

Average tornado risk area across the United States for April, May and June.

April kicks off what is typically the most active and dangerous three-month period of the year for tornadoes in the United States.

Strong tornadoes can occur in any month, as we saw in early March when 19 people were killed by an EF4 twister in Putnam County, Tennessee. But weather history shows April, May and June are the months with the most potential of having both the greatest number of tornadoes and the most intense tornadoes in a given year.

The U.S. averaged 1,225 tornadoes annually from 1999 to 2018. Fifty-four percent of those tornadoes happened from April to June.

May typically sees the most tornadoes each year, with an average of 272. This is followed by June and April, which average 202 and 189 tornadoes per year, respectively. 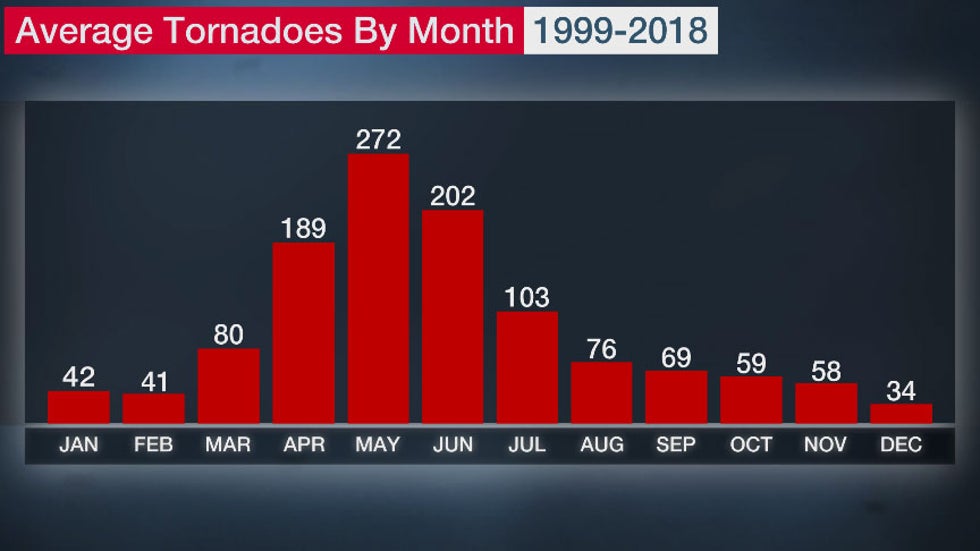 April-June average the most number of tornadoes during the year.

One of the most active prolonged period of tornadoes occured last spring from late April through May. Five-hundred and six tornadoes happened in May 2019, which was the third busiest month based on records dating to 1950.

(MORE: Stretch of Tornadoes, Severe Weather in Spring 2019 Was One of Most Prolific in 8 Years

A stagnant jet stream pattern was the reason for this stretch of severe weather. The jet stream persistently dove southward over the West and bulged northward over parts of the East. This setup allowed round of disturbances to track into the central U.S., where warm, humid air was able to generate the instability to spark severe thunderstorms and tornadoes.

Historically, the greatest threat of tornadic thunderstorms has migrated from the South into parts of the Plains and Midwest as we advance through April, May and June, as the graphic at the top of the article shows.

For example, the potential for tornadoes in the South is much lower in June compared to April. Although moisture is abundant across the southern region in late spring, the strong jet stream needed to help make conditions favorable for tornadic thunderstorms moves northward toward the Canadian border.

Tornado Intensity Is a Factor in Spring, Too

The sheer number of tornadoes from April through June isn't the only thing that makes this such a dangerous time of year – tornado intensity is also a factor.

About 58 percent of all twisters rated F3/EF3 or stronger (1950-2012) touched down in those three months, according to statistics compiled by Dr. Greg Forbes, severe weather expert for The Weather Channel. This rises to 69 percent when examining tornadoes F4/EF4 or stronger.

The most violent F5/EF5 rating has been assigned to 59 tornadoes dating back to 1950, and all but 10 of those occurred in April, May or June.

All tornadoes pose a threat, but intense twisters account for a higher number of fatalities and damage. About 86 percent of the deaths from 2008 through 2019 were from tornadoes rated EF3 or stronger, according to NOAA's Storm Prediction Center. 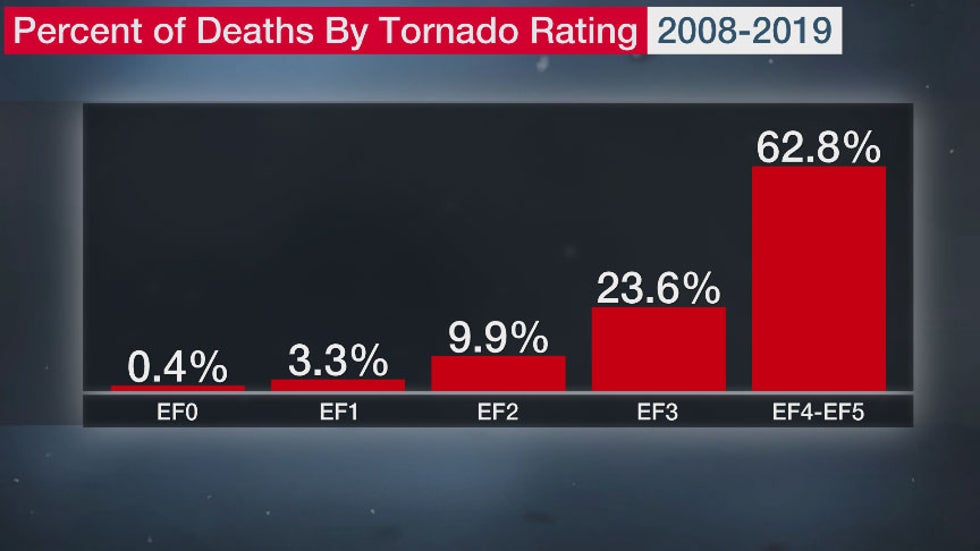 The largest percentage of tornado deaths are caused by twisters rated EF3-EF5.

Eight of the 10 worst U.S. tornado outbreaks have occurred in April or May, mostly due to the fact that upper echelon tornado intensities are more likely in those months. Nine of the 10 worst individual tornadoes spawned during April, May or June.

Why Is Spring the Most Dangerous Time?

Tornadoes are more common in spring compared to other months because the required atmospheric ingredients come together more often this time of year.

Outbreaks of tornadoes occur when a storm system propelled by a strong, southward dip in the jet stream punches into the Plains, Midwest or South. This is accompanied by warm and humid air flowing northward out of the Gulf of Mexico.

Devastation from an EF5 tornado that struck Joplin, Missouri, on May 22, 2011.

If wind shear is particularly strong in the first few thousand feet near the surface, these supercells would more likely produce tornadoes.