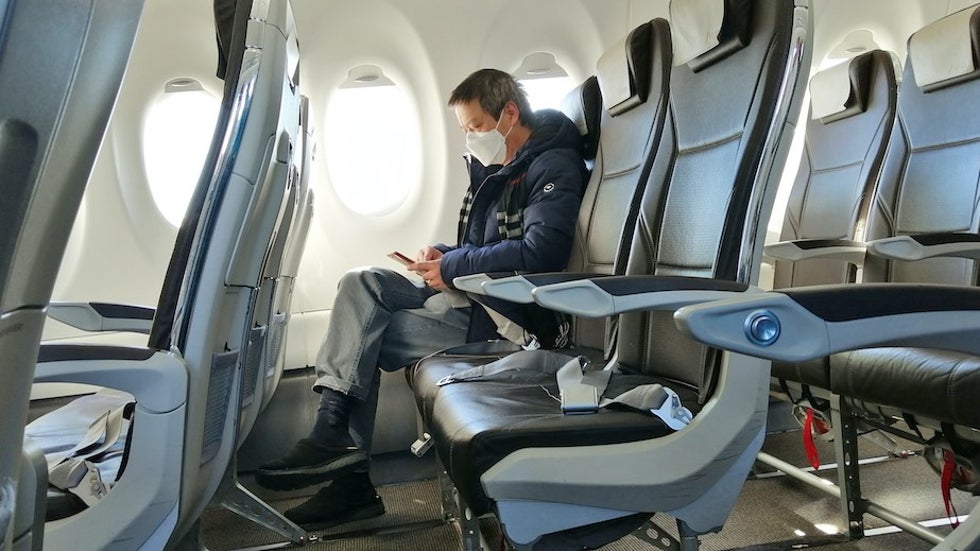 A passenger wears a face mask on an almost empty Swiss Air flight from Hamburg, Germany to Zurich, Switzerland, on March 22, 2020, in Hamburg, Germany. Airlines worldwide have had to cut back flights as a consequence of the COVID-19 pandemic.
(Sven Creutzmann/Mambo photo/Getty Images)

The sudden dropoff in passenger air traffic across the United States and the world in response to the coronavirus threat will likely have an impact on the computer models that guide day-to-day weather forecasting.

Research dating back to the brief hiatus in U.S. air travel after the attacks on Sept. 11, 2001, suggests that the loss of many of the observations normally collected by aircraft could lead to a decrease in the quality of model forecasts.

Global commercial air traffic decreased by 4.3% in February 2020 compared to a year earlier, according to statistics compiled by Flightradar24.com. Additional cutbacks have been occurring in March, and others are planned for April and beyond.

One analyst cited by Bloomberg predicts that commercial air traffic will drop by 8.9% in 2020 compared to 2019, which would be the largest year-over-year drop in data going back to 1978.

Observations of temperature and wind routinely collected by commercial aircraft are routed to government weather agencies and other users around the world through the Aircraft Meteorological Data Relay (AMDAR) program, operated by the World Meteorological Organization.

The number of AMDAR reports has risen from about 7,000 per day in the early 1990s to more than 800,000 by 2017, according to a recent overview of forecast improvements published by the American Meteorological Society and led by Stanley Benjamin (NOAA Earth System Research Laboratory).

"The number of automated aircraft observations has tripled in the 2010s alone, which in fact is a major contribution to global and regional forecast skill," Benjamin and co-authors said.

Over the last few days, the volume of aircraft weather observations over the U.S. has dropped by more than 50%, according to Benjamin. 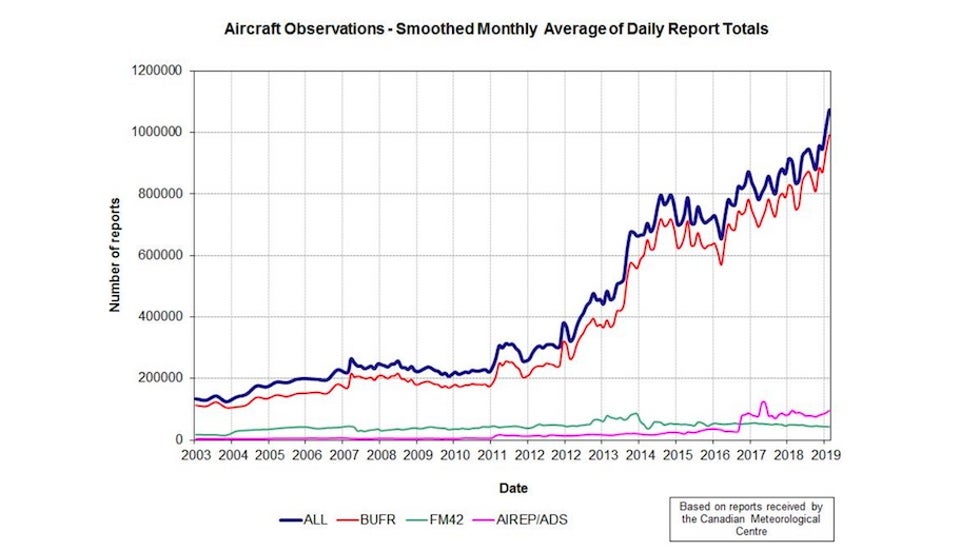 Smoothed monthly average of daily (aircraft) report totals from the AMDAR system, which collects weather observations from aircrafts and relays them to forecast agencies and other users. As of 2019, each day saw an average of more than 1 million observations collected and routed via AMDAR.
(World Meteorological Organization)

The aircraft observations are a key piece in the jigsaw of national and global weather data that is fed into computer models through a process called data assimilation. Multiple studies have found that aircraft are among the most important data sources for reducing the error in forecast models.

A 2017 analysis led by Eric James (CIRES/University of Colorado/NOAA), and co-authored by Benjamin, found that the inclusion of aircraft observations reduced six-hour forecast errors in wind, humidity and temperature by 15 to 30% across North America in the Rapid Refresh (RAP) model, which is run every hour.

Based on this 2017 study, "we would expect some decrease in skill at least in some specific situations from the [current] decline in aircraft data volume," said Benjamin.

An analysis conducted last year at the European Center for Medium-Range Weather Forecasting (ECMWF) found that omitting all aircraft data resulted in a forecast skill degradation of up to 15% at Northern Hemisphere jet-stream levels and up to 3% for surface pressure, according to ECMWF’s Bruce Ingleby.

He added that satellite data are the only data source more important than aircraft data in enhancing forecast quality at the center, which is a world leader in assimilating many types of data into models.

As of March 23, there was a 42% reduction of aircraft data globally, and a 77% reduction over Europe, compared to early March, according to ECMWF. 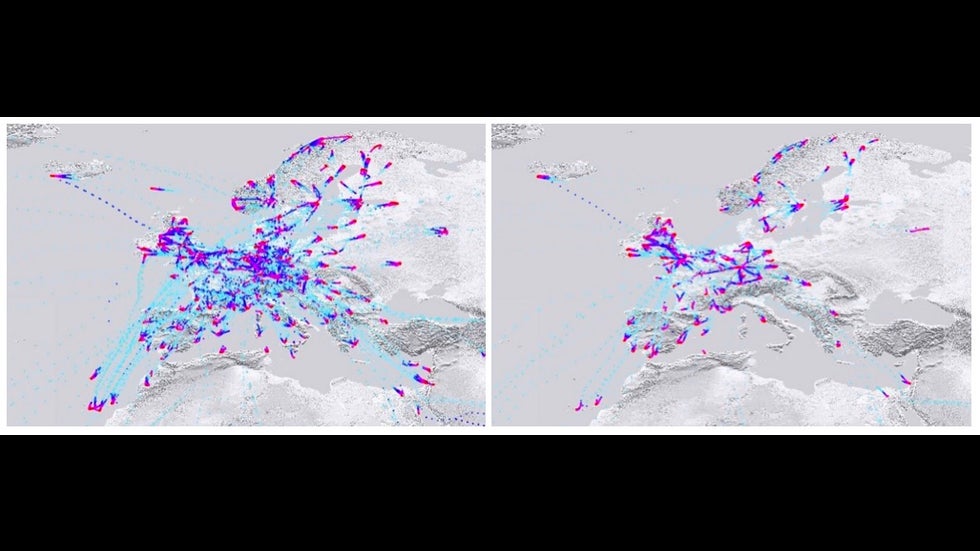 European AMDAR coverage for March 2, 2020 (left) and March 23, 2020 (right). Colors indicate the altitude, with red indicating low altitudes. There is a general reduction in report density, particularly over Italy and parts of Eastern Europe.
(Stewart Taylor, EUMETNET, via ECMWF)

NOAA’s flagship global model, the GFS, is now assimilating only about two-thirds the number of aircraft-based weather reports that it was incorporating in late February, according to data from NOAA’s National Centers for Environmental Information.

"We are anticipating the substantial reduction in the availability of U.S. AMDAR data to continue over the coming weeks, likely to generate some measure of impact on the output of our numerical weather prediction systems," NOAA's Christopher Hill said in a ECMWF news release on Tuesday.

The Effect of 9/11 on Model Forecasts

Virtually all air travel across North America was grounded for nearly 48 hours following the 9/11 attacks. One retrospective study at NOAA, summarized by Benjamin at an AMS conference talk in January, found that the loss of that aircraft data meant that a 3-hour forecast of jet-stream-level wind speeds over the U.S. and Canada in one model (the Rapid Update Cycle) was no better than a 12-hour forecast, whereas the 3-hour forecast was typically about 2 mph more accurate.

Hidden within this difference are episodes of "peak error," where the absence of aircraft data led to much larger model errors, according to Benjamin.

While the 9/11 shutdown was limited to North America, the current dropoff in air traffic is global, so it has the potential to affect model-based predictions across the world. And as noted above, there is far more data from aircraft going into the models than there was in 2001.

Counterbalancing that risk, according to experts, is the wealth of global satellite-based data that has become available over the last 20 years.

A statement released Tuesday by NOAA spokesperson Susan Buchanan said that "it’s too soon to quantify the exact impact, because the decrease is only occurring for certain flights and routes, and while there is a reduction of commercial passenger flights, we still receive valuable aircraft data from overnight cargo and package carriers.

"Even though a decrease in this critical data will likely negatively impact forecast model skill, it does not necessarily translate into a reduction in forecast accuracy since National Weather Service meteorologists use an entire suite of observations and guidance to produce an actual forecast."