Summerlike temperatures have spread across the South, setting dozens of daily record highs in what has already been one of the warmest starts to March on record.

A dome of high pressure is bulging northward into the South. When that happens, there is sinking air in the atmosphere that causes temperatures to heat up. 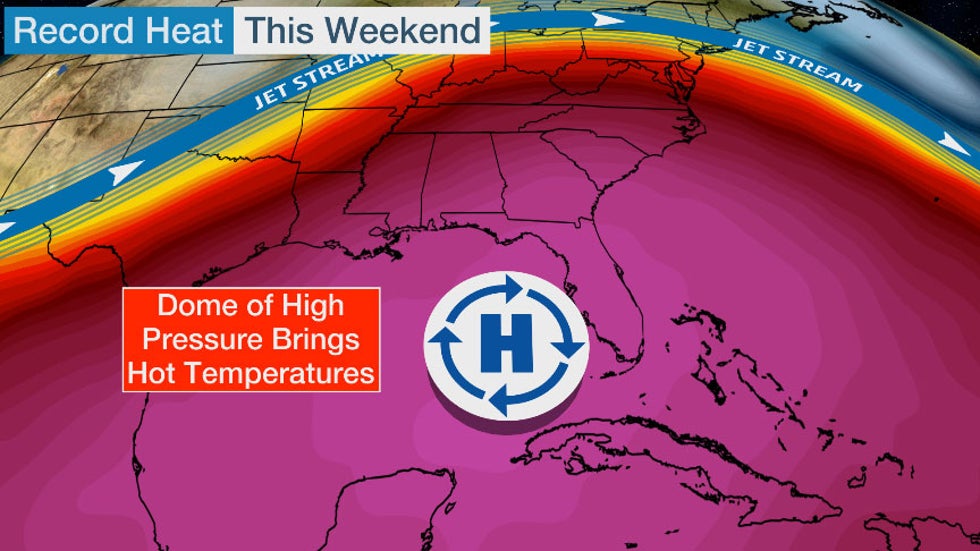 Warmer-than-average temperatures developed over South Texas, the Gulf Coast and Florida earlier this week and spread across much of the South late this week. This anomalous warmth will continue across portions of the region into early week.

Jacksonville, Florida, set a daily record high of 94 degrees on Saturday, which also breaks the all-time March record of 91 degrees set on March 10, 1974.

Temperatures on Thursday hit 100 degrees in both Texas and Oklahoma. The town of Hollis, Oklahoma, saw its earliest 100-degree reading on record Thursday.

A cooperative observing station at Zapata in the Rio Grande Valley of Texas reported a high of 108 degrees on Thursday. If confirmed, it appears this would be an all-time U.S. record high for the month of March. (All-time monthly records on the national and state level are not regularly tracked by NOAA.)

Zapata reported 105 degrees on Friday, and nearby Laredo reached at least 101 degrees.

Galveston, Texas, set its fourth record high in five days with a high of 81 degrees on Friday.

Temperatures will continue to sizzle in parts of the Southeast Sunday and in most of Florida into early week.

Houston, New Orleans and Orlando will end up with multiple days in the upper 80s or lower 90s. Some parts of Florida away from the coast could reach the mid-90s. Those temperatures are more typical of the average high in late May or June in those cities.

For perspective, average highs in Houston and New Orleans in late March are in the mid-70s. Orlando's average high is near 80 degrees this time of year.

More daily record highs are possible on Sunday along the northern Gulf Coast into Florida and northward into the Carolinas.

Numerous record warm low temperatures are also expected from the South into the Ohio Valley.

A cold front allowed temperatures to tumble back closer to late-March averages Saturday in most areas west of the Mississippi River. The cooler air will begin to spread into parts of the Tennessee Valley and northern Gulf Coast regions on Sunday.

However, temperatures will remain above average with additional daily records possible in Florida into early week.

Temperatures have been much above average so far this March in the South.

Dozens of cities are on pace to have a top-10-warmest March. Here's where this month ranks among the warmest Marches on record for several cities through March 26, according to the Southeast Regional Climate Center: