Another Coastal Storm Heads for the Northeast, But Here’s Why It’ll Bring More Rain Than Snow

Another coastal storm will develop off the mid-Atlantic coast by midweek, but this next system will be warmer and track farther offshore than the one that brought snow and rain to the Northeast on Monday.

Low pressure will slide from the Plains and Mississippi Valley to near the mid-Atlantic and Northeast coasts by Wednesday. A weak area of high pressure will be in place before the system arrives, but it will not be strong enough to supply a deep layer of cold air for widespread snowfall in interior portions of the region, as was the case on Monday.

Instead, cold air will be limited with the midweek coastal low because it'll track farther south and draw in warmer air from the Gulf of Mexico. That means snowfall will likely be confined to higher elevations. 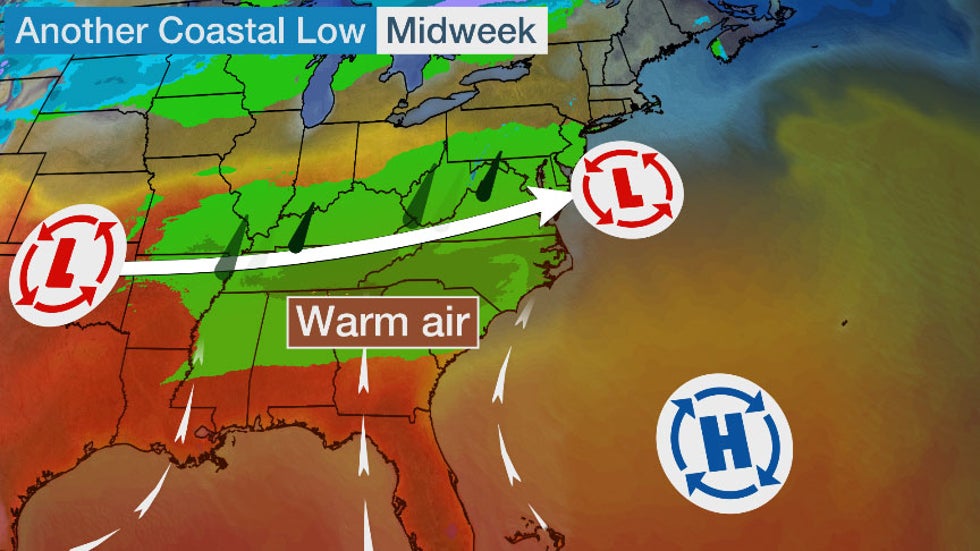 Another coastal low will develop off the mid-Atlantic coast by midweek, but it will draw in warmer air from the South and track farther offshore, resulting in less precipitation in the Northeast.

Precipitation will arrive Tuesday night, with light to moderate rain overspreading the mid-Atlantic region. Some snow may mix in central Pennsylvania.

Light to moderate rain will continue in the mid-Atlantic through the day Wednesday while precipitation also spreads into parts of southern New England and southeastern New York state.

A rain-and-snow mix is possible over the higher elevations of Pennsylvania, the Catskills of New York, the Litchfield Hills of northwestern Connecticut, the Berkshires of western Massachusetts and parts of southern Vermont. Some of these areas may change over to rain by the afternoon.

The precipitation will taper off from west to east Wednesday night.

How Much Rain and Snow?

Rainfall totals will not be particularly heavy, with most areas in the mid-Atlantic receiving less than an inch of rain Tuesday night through Wednesday night. Little to no precipitation accumulation is expected in New England and most of New York.

A coating to a few inches of snow is predicted in the higher elevations of the interior Northeast. Accumulations on pavement may be much less than on grassy surfaces due to the higher March sun angle keeping road temperatures warmer this time of year.