A coastal low will impact the Northeast into early Tuesday, with snow across parts of the interior and rain for most locations near the coast.

The Weather Channel has named this system Winter Storm Quincy.

Snow was falling on Monday night from parts of upstate New York into New England. However, rain was the dominant precipitation type along the coast from extreme southern New England to New Jersey.

Some of the heaviest snow on Monday was reported in central New York, where 6.8 inches piled up in Syracuse, its second-snowiest day this winter season. Up to 6 inches of snow was also measured in parts of New York's Capital District, including the city of Schenectady.

Lake Desolation, in the southeast Adirondacks, picked up 8 inches of snow.

Below, we take a closer look at the messy start to the first full week of spring.

Rain is expected toward the Northeast coast to the south of Boston, while snow or a mix of rain and snow will shift from eastern New York across northern and central New England.

Precipitation will likely come to an end by dawn Tuesday, with the exception of eastern Maine, which could have snow linger into Tuesday morning.

Another round of rain and interior snow will move into the Northeast midweek as another coastal low develops and tracks near the region.

(MORE: Another Coastal Storm Heads for the Northeast

How Much Additional Snow and Rain?

The Interstate 95 corridor to the south of Boston will likely have little to no snow accumulation.

Higher elevations in the Northeast – including parts of the Catskills, Adirondacks, Berkshires, Green Mountains and White Mountains – will likely have the highest additional snowfall totals. Moderate to heavy snowfall may also extend into western and southern Maine. More than 6 inches of heavy, wet snow may accumulate in these areas.

Additional rainfall totals of up to an inch are expected toward the coast.

A Lack of Northeast Snowfall This Winter

Snowfall was in short supply for most of the Northeast this winter, and it has been two years since the last high-impact snowstorm hit the Northeast urban corridor.

Low-pressure systems either moved too quickly out into the Atlantic without much strengthening near the East Coast, or they have tracked farther inland, bringing rain instead of snow.

However, Portland, Maine, has measured near-average snowfall this season, and Caribou, Maine, has picked up 117.7 inches of snow, 22 inches more than average to date. 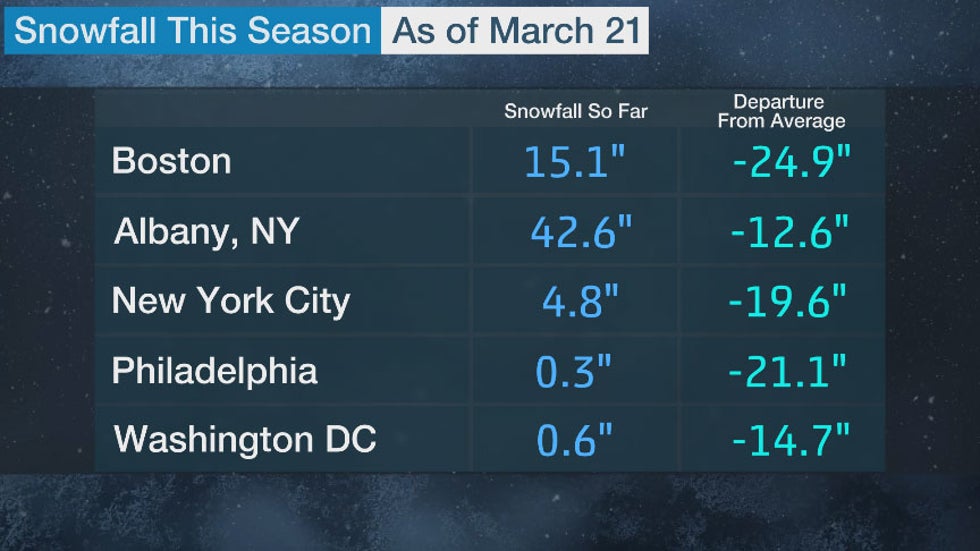 The snowfall deficits will likely not be erased this season, since the current pattern is not conducive for heavy snowfall toward the Northeast coast. The Northeast typically has its last snowfall in March. It can still receive snow in April, but the Interstate 95 corridor from Boston to Philadelphia averages less than 2 inches in April.