More rain and mountain snow will move through the West, including communities in worsening drought, in the early part of the week ahead.

This wet pattern began when an area of low pressure moved into the California coast on Sunday. It brought more than an inch of rain to much of the Los Angeles area.

A second system will swing southward along the West Coast and bring more precipitation to the region through midweek.

The first storm system will bring rain and higher-elevation snow to Southern California, the Sierra Nevada and southern portions of Nevada.

By early Monday, the second system will begin to bring rain and mountain snow to the Pacific Northwest.

Both systems will spread inland through the day Monday, from the coast to as far inland as the Four Corners region. Snow will spread into the northern Rockies by Monday night.

Coastal rain and mountain snow will continue along the West Coast and in the northern Rockies on Tuesday. Some heavier snow is possible in the Sierra Nevada.

Snow will spread from the Rockies into the Northern Plains by Tuesday night as the second low-pressure system grows in size, spreading its energy from the Pacific to the Plains.

On Wednesday, rain will gradually come to an end along the Pacific coast while snow continues from the Sierra to the central Rockies.

While heavy rain and snow don't appear to be a problem with these two storm systems, a foot of snow could fall in the Sierra Nevada, with generally lighter snow in the Cascades and northern Rockies.

Any precipitation across the West is needed.

Drought conditions have worsened in much of Oregon, California and Nevada in the last month, while the Four Corners region continues to be in a severe drought. 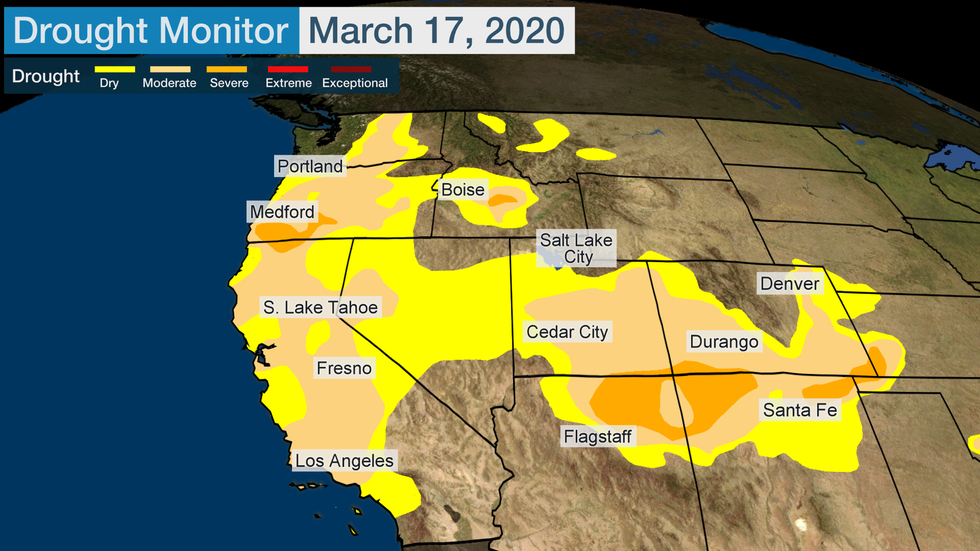 Storm systems are a welcome sight this time of year, especially in California, where rainy seasons are more pronounced than in the rest of the West.

California has a dramatic decrease in rainfall in April and May, meaning the Golden State has limited time to catch up on rainfall before the firehose typically shuts off.

While California's reservoirs are currently OK in terms of water levels, this water is mostly from last year's storms and the winter storms of earlier this winter.

Up until a couple of weeks ago, storm systems were sweeping through Washington and down into the Rockies and eventually the South rather than through the Southwest. Some progress has been made, but there is a long way to go.

This is apparent in the chart below that shows how much water is available for those reservoirs later this year.

The amount of water being held in the snowpack of the Sierra, portions of Oregon and Nevada and the higher terrain of southern Idaho is as low as near half of average for late March due to a drier-than-usual rainy season.

Less water being locked up in the snowpack means those reservoirs will slowly empty as snow disappears by this summer. 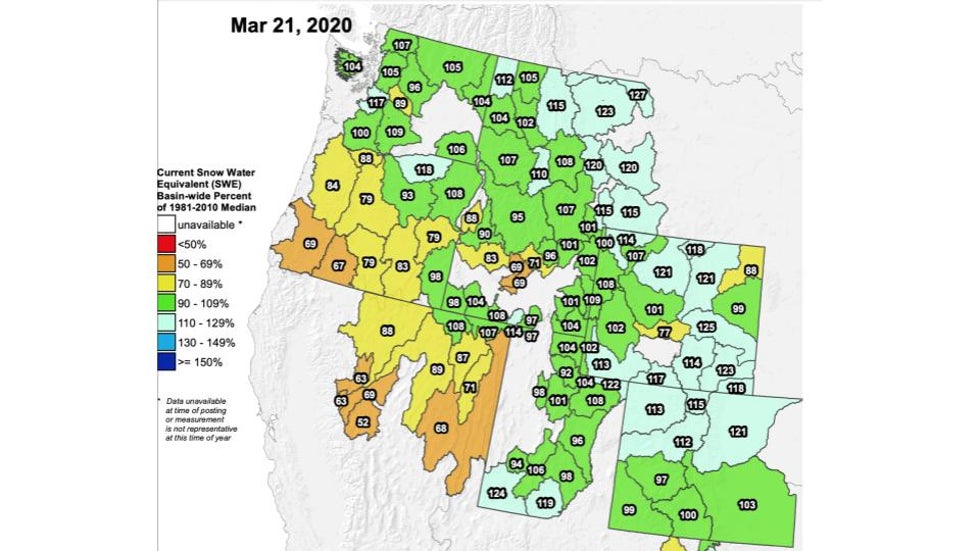 Moderate water-content levels continue in several states.
(The lower the number, the less water is being held in the snowpack compared to average.)

Forecasts continue to point toward early and above-average fire weather conditions, or more fires, in portions of California due to the drier rainy season. Worsening drought is expected across much of the West.