Radar is typically used for tracking rain and snow, but it can also detect living things, like bats. This was the case when three groups of bats were spotted emerging from their caves Thursday evening, in southern Texas.

The circles on the image below are groups of bats coming out of their caves for the night. This is a nightly occurrence from spring to early fall in this part of Texas, but it isn't always captured on radar.

The "flying eagle" or v-notch supercell thunderstorm that is shown on radar developing in Mexico and moving into Texas is also worthy of note.

This type of severe thunderstorm occurs when the updraft of the storm is very strong and tall. The winds aloft are forced to go around the core of the storm and the result is a "v" or eagle shape appearance on radar.

Here are 14 other things radar has detected in recent years.

A cloud of ladybugs was spotted in Southern California on the evening of June 4, 2019.

The National Weather Service office in San Diego noted that the radar echoes looked like rain but there were no visible clouds, so the office contacted a weather observer in the area. The observer said there were "ladybugs everywhere," the Washington Post reported. 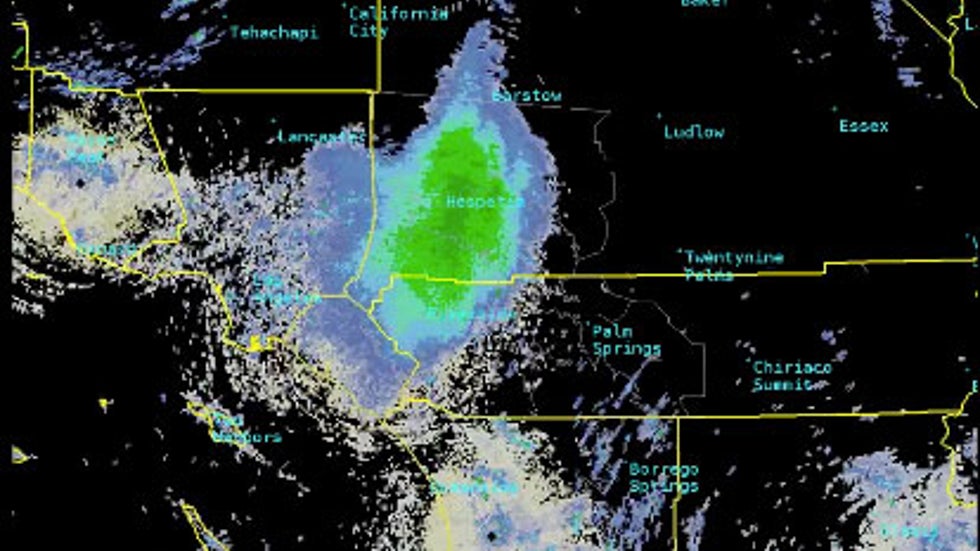 Radar image from the evening of June 4, 2019, showing what looked like precipitation but was likely ladybugs.
(National Weather Service San Diego)

The area of ladybugs was about 80 miles by 80 miles at a height between 5,000 and 9,000 feet. The weather observer said little specks were flying by so it was not a solid mass of ladybugs, the Los Angeles Times reported.

However, Mark Moede, a meteorologist at NWS San Diego, cautioned that given that the swarm was so big there is a chance that it was something else.

2. Bugs and Birds End Their Flight

The black arrows in the animation below point to dissipating ring-shaped radar echoes in blue and green. That's called ground clutter and it can include bugs and other creatures, such as birds and bats.

Ground clutter – which can also include dirt, dust and buildings – shows up on radar when certain atmospheric conditions are present, particularly at night. Living things usually show up on radar around sunrise and sunset.

Bugs in this ground clutter were ending their flight, according to the National Weather Service (NWS) in State College, Pennsylvania.

Doppler radar detected a flock of birds taking flight at sunrise in southeast Georgia on Nov. 7. 2018.

Though birds are often seen on radar as they take off in the morning, this occurrence near Woodbine was particularly vivid.

The NWS in Jacksonville, Florida, provided a three-dimensional radar view of the mass of birds taking flight in all directions away from where they were roosting overnight. You can see this depicted by the expanding green donut of radar echoes which shows the birds gaining altitude and moving farther away from where they originated near the ground.

Some birds species will roost by the thousands at nighttime. At sunrise, they take off in mass to seek food.

The Miami Fort power station, located near the intersection of Kentucky, Indiana and Ohio, was caught on Cincinnati airport's radar making snow in January.

Light winds from the northwest just above the surface, temperatures in the single digits and a very shallow layer of relatively humid air located in the lowest 1,000 feet of the atmosphere mixed with the steam from the power plant in order to produce snow near Cincinnati.

This isn't a phenomenon completely new to meteorologists. Power plant snow was also seen in the Tulsa, Oklahoma, on the same morning. Both locations reported light accumulations on the downwind side of their respective power plants. Some in northern Kentucky had up to 4 inches of power plant steam snow.

5. A Ship on the Columbia River

Meteorologists at the National Weather Service spotted an object traveling against the weather near Portland, Oregon, on Nov. 13, 2017.

It turns out that the object was the Maltese cargo carrier Densa Jaguar navigating down the Columbia River toward Portland. The ship reaches roughly 24 feet above the waterline and is 625 feet long, according to vesselfinder.com.

Ships like this one can be seen on radar because they are generally large objects and sometimes travel against the flow of precipitation. Ships that travel in a zigzag pattern to avoid land or stay in the deepest water can make themselves easier to spot since weather objects generally move in straight lines.

In order to be picked up on radar, ships generally have to sail close to the radar since radar beams arc upward and will miss shallow or short objects farther from the radar site. The Densa Jaguar was less than 14 miles from the radar beam, but the Weather Service explained that the beam was bent toward the ground.

Detailed radar image from the Portland radar including the Densa Jaguar encircled in white. Objects moving away from the radar are shown in red pixels while objects moving toward the radar are shown in green. In this case, the green arrow also denotes the movement of the Densa Jaguar, toward the south and southwest along the Columbia River.
(NWS Portland; Annotated by Weather.com Meteorologists)

Boats like this one are sometimes captured in high traffic ports like Seattle, Miami, Tampa Bay and the Chesapeake Bay area. Planes and interstate traffic can also be picked up by radar in certain atmospheric conditions.

In mid-July 2017 the Met Office tweeted out the image below that showed radar detecting something in an area with no clouds over the United Kingdom. After taking a poll of answers, the Met Office revealed that the radar spotted flying ants.

The Met Office said flying ants "disperse in particular conditions dependent on temperature, humidity and wind speed." It's a summertime occurrence when the winged ants take off on a reproduction mission to create a new colony, according to BBC.com.

Doppler radar in Montana detected an unusual feature on April 10, 2017 as a small area of orange and red echoes made an appearance southwest of Billings in calm weather conditions.

The small blip of radar activity was investigated by the National Weather Service (NWS) in Billings after a Twitter user asked them what it may have been. It was determined that the radar activity was likely associated with chairlifts at the Red Lodge Mountain ski area.

The red and orange pixels depict where the chair lift was detected by radar at Red Lodge Mountain ski area in Montana on Monday morning. (NOAA)

Zooming in closer on the radar image of the orange and red pixels you can see how they match up with the ski area. Notice how the various ski runs appear through the slightly transparent radar echoes.

This zoomed in image reveals the ski area runs right underneath where the orange and red radar pixels briefly appeared. (NOAA)

Traffic moving along Interstate 37 between Corpus Christi and San Antonio was spotted on April 17, 2017, as the National Weather Service pointed out. You can see this in the narrow line of pink and light blue shadings in the animation below well northwest of Corpus Christi between the town labels for Mathis and Edroy.

In cases with a warm layer of air just above the surface, and relatively cool air near the surface, radar can detect traffic, most commonly at night. When this happens, the radar beam is ducted, or bent downward, following the curvature of the Earth, rather than its normal path shooting up higher and higher, reflecting off things such as highway traffic. Another example of this occurred on Interstate 20 near Dallas-Fort Worth during July 2016.

As the International Space Station soared southeastward across the evening sky Feb. 15, 2017 in northeastern Arkansas, the National Weather Service office in Memphis, Tennessee, spotted a large flock of geese on radar, which appeared to be chasing the ISS.

The grayish-colored reflectivity appearing in the two-hour radar loop above, spanning from 6:30 to 8:30 p.m. CST on Feb. 15, indicates the gaggle of geese flying over northeastern Arkansas in hopes of catching up with the ISS. In reality, they can't physically catch it since the ISS is in space and the geese are likely flying just a few thousand feet above the Earth's surface.

A couple hours later, NWS-Memphis checked on the geese again. The determined animals had slipped below the main Memphis radar beam but were spotted by a smaller tower radar near the Mississippi River in Tunica, Mississippi.

At some point during the summer every year, the Doppler radar at the NWS in La Crosse, Wisconsin, lights up with echoes, indicating that a mayfly hatch has occurred.

An example of this happened on the evening of July 26, 2016, where it usually does right along the Mississippi River near the Minnesota and Wisconsin border. The mayflies often emerge in enormous numbers, allowing radar to detect them.

You can see the hatch in the image above in the green echoes from near the label for the city of La Crosse southward along the river.

Circled are the emerging colonies of bats heading out to feed on insects June 13, 2016. (NWS-San Antonio)

This image was posted by the NWS in San Antonio, Texas, on June 13, 2016 with a caption "The Bat Signal is strong tonight!"

Each circle on the map shows an emerging bat colony detected by radar as they depart for the evening to feast on insects. This is a common summertime occurrence in central Texas.

Sometimes, bats even exit their caves in waves like seen here north of San Antonio as concentric rings.

Grasshoppers and beetles detected by radar near the border between Texas and Oklahoma on July 22, 2015.

The green and yellow radar echoes in this image from July 22, 2015, show grasshoppers and beetles detected by radar near the border between Texas and Oklahoma, according to a tweet sent by the NWS office in Norman, Oklahoma. Since the radar is very sensitive, you would not see a huge swarm at ground level, the NWS said.

The NWS office in Reno, Nevada, posted to Twitter on March 27, 2015, the radar image above that shows the spring migration of Monarch butterflies. These butterflies were spotted using a differential reflectivity scan, which is typically used to identify different types of precipitation, hail size and tornadic debris. As shown in the example above, it can also identify non-meteorological echoes such as birds and insects. In this case, the NWS says the differential reflectivity shows objects that are much wider than they are taller, or what you would expect from the body type of a butterfly.

Energy created by wind farms can mess with radar results. The Butler Ridge wind farm west of Milwaukee is one example. According to NWS Milwaukee/Sullivan, turbines stretch about 400 feet into the air, and sit within the line of sight of the NWS doppler radar in Jefferson County, Wisconsin.

"A small part of the electromagnetic energy radar beam sent from the radar is reflected back by the rotating turbines," the NWS said. "The radar processes this 'returned energy' as an area of precipitation and plots it accordingly on the map," which you can see circled in yellow.