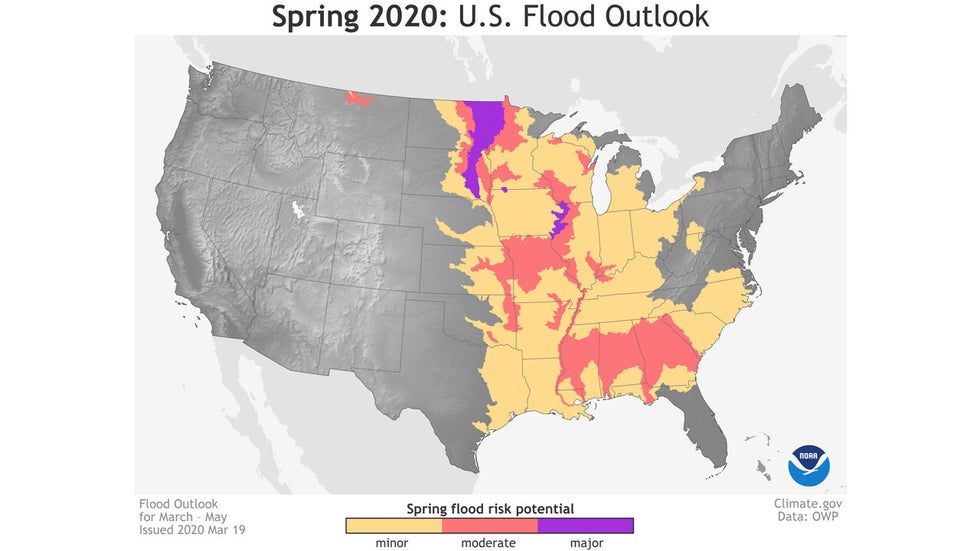 This map depicts the locations with a greater than 50% chance of major, moderate or minor flooding from March through May 2020.
(NOAA)

Spring 2020 is expected to bring widespread flooding to the central and southeastern United States, but it is not predicted to be as severe or prolonged as last year's historic floods, according to an outlook issued Thursday by NOAA.

Twenty-three states from the Northern Plains to the Gulf Coast are forecast to have moderate to major flooding from March through May, with the greatest flood potential in parts of North Dakota, South Dakota, Minnesota, Illinois and Iowa. These areas are shaded in purple on the map above.

A combination of factors, including ongoing rainfall, highly saturated soils and increased odds of above-average precipitation this spring, will contribute to the higher likelihood of flooding in the central and southeastern U.S. One-third of the nation is at risk of at least minor flooding.

NOAA said the areas with the greatest threat for moderate to major flooding include the upper and mid-Mississippi River basins, Missouri River Basin and the Red River of the North. Moderate flooding is likely in the Ohio, Cumberland, Tennessee and Missouri River basins, as well as the lower Mississippi River Basin and its tributaries, the flood outlook noted.

Adding insult to injury, soil moisture is already at high levels in most of the central U.S., and many rivers in the central and eastern states are running high. Therefore, any locally heavy rainfall in these high-risk areas could trigger flooding.

"Nearly every day, dangerous flooding occurs somewhere in the United States, and widespread flooding is in the forecast for many states in the months ahead," said Ed Clark, director of NOAA’s National Water Center in Tuscaloosa, Alabama. "Working with our partners across the National Weather Service, we provide the best available forecast products to enhance resilience in communities at greatest risk."

NOAA said its flood outlook considers various different factors such as the current conditions of the snowpack, drought, soil moisture, frost depth, streamflow and precipitation. Locally heavy rain events, particularly thunderstorms, tend to become more common as spring progresses and can lead to flooding in areas not depicted in the outlook.

The Ohio Valley and southern Great Lakes have the highest odds of above-average precipitation over the next three months.

Meanwhile, below-average precipitation is favored in parts of the West, including the Pacific Northwest, Great Basin, Four Corners region and western and southern Texas.

Portions of Oregon, far Northern California and northwestern Nevada have the highest odds of being drier than average from April through June.

NOAA expects drought conditions to persist and expand throughout California in the coming months, and it said drought is likely to persist in the central and southern Rocky Mountains, Southern Plains, South Texas and parts of the Pacific Northwest. 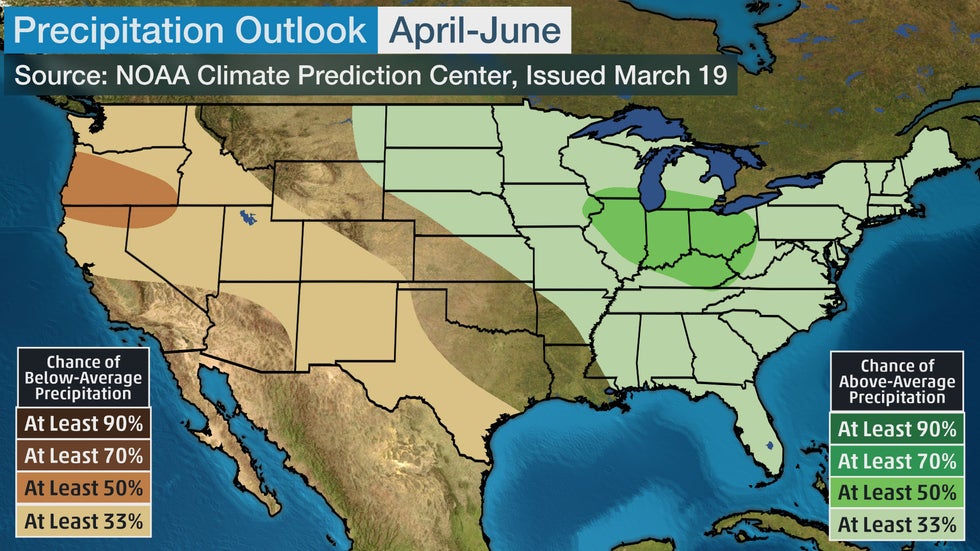 Areas shaded in darker green have the highest chance of above-average precipitation from April through June 2020, according to NOAA's spring outlook.

Most of the U.S. will likely have warmer-than-average temperatures from April through June. The best chance of above-average warmth will be from California and southern Oregon south and eastward to the southern Great Basin, Desert Southwest, Texas, the Gulf Coast and the East.

No part of the country is predicted to have below-average temperatures this spring, NOAA said.

Keep in mind, these temperature and precipitation outlooks are meant to be an overall trend for the three-month period covering April through June.

An individual cold front or an upper-level ridge of high pressure can bring a brief period of cooler temperatures with enhanced precipitation or a period of warm, dry weather, respectively, that may not be indicative of the overall trends that are forecast. 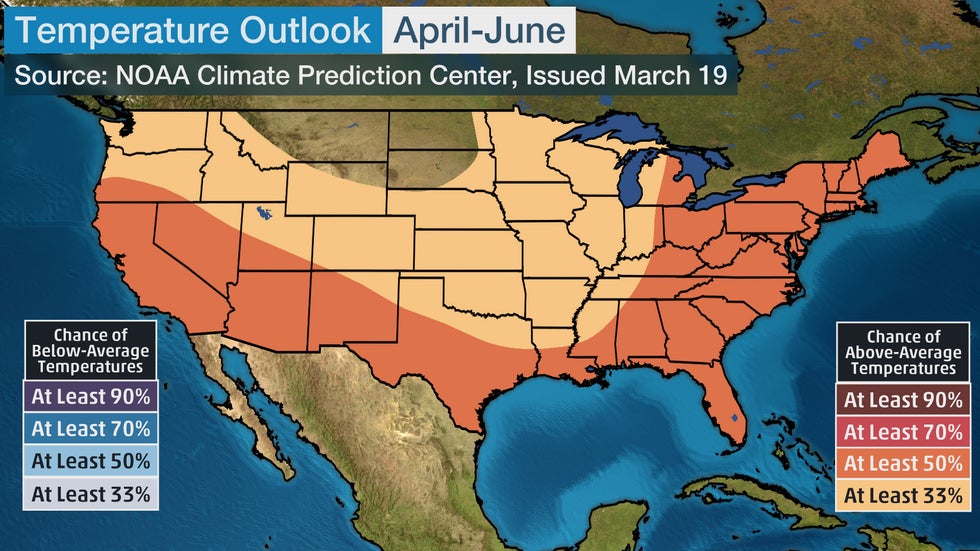 Areas shaded in darker orange have the highest chance of above-average temperatures from April through June 2020, according to NOAA's spring outlook.