It's Already One of the Wettest Winters On Record So Far in Parts of the South, and More Rain Is Ahead Through Thursday 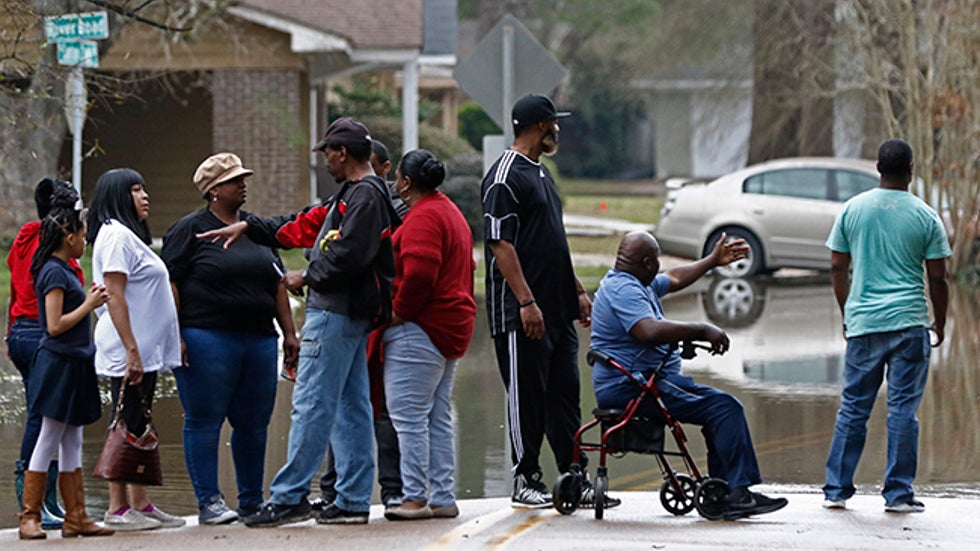 Area residents observe the swirling Pearl River floodwaters drain from North Canton Club Circle in Jackson, Mississippi, Tuesday, Feb. 18, 2020. Officials have limited entry to the flooded neighborhoods as they have warned residents about the contamination of the receding waters and the swift currents.
(AP Photo/Rogelio V. Solis)

More rain will soak parts of the flood-weary South through Thursday, adding to what has been one of the wettest Februaries and winters to date from Mississippi to the Carolinas.

The first round of rain, associated with an approaching cold front, triggered flash flooding in parts of Arkansas, Mississippi and Alabama Tuesday.

(WHERE THE RAIN IS NOW: South Interactive Radar Loop

Flooding closed a number of roads in Saline County, Arkansas. A section of a road was washed out near Oktoc, Mississippi, and roads were flooded in West Point and Winona, Mississippi. 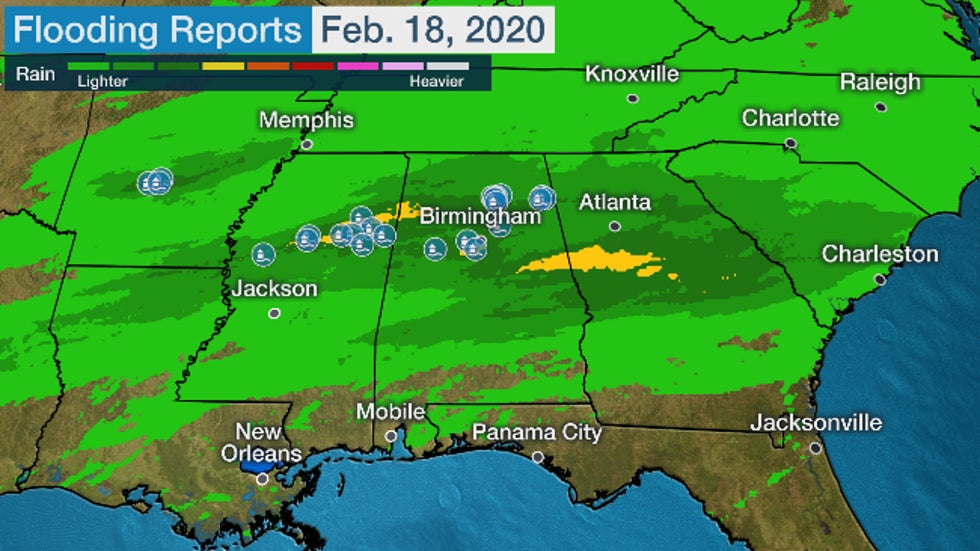 Reports of flash flooding on Feb. 18 are indicated by the blue dots. The heaviest rainfall is shown by the darker green and yellow contours.
(Flood reports: NWS)

Following that round, jet stream energy riding over a stalled frontal boundary near the Gulf Coast will spread more rain from Texas to the Carolinas and Florida through Thursday night, before high pressure sweeps the rain away from most of the Southeast by Friday.

Fortunately, this next round of rain won't be nearly as heavy as what fell earlier this month.

Total rainfall through Thursday night is expected to be on the order of an inch or two, with some locally higher amounts possible where bands of rain persist for a few hours.

Over 130 river gauges are currently reporting flooding in the Southeast. Any additional rain will run off into swollen rivers, creeks, streams and reservoirs, since the soil is so saturated. However, the rain isn't expected to be heavy enough to trigger new rises on rivers. 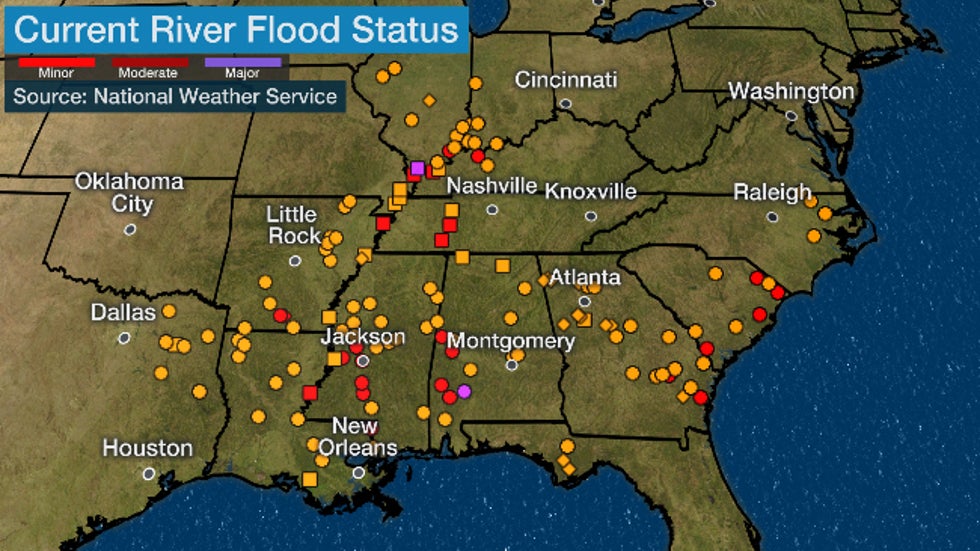 On the northern edge of this precipitation, there will be just enough cold air for some snow from parts of Tennessee into North Carolina and Virginia Thursday and Thursday night.

Winter storm warnings have been issued for a part of the Smoky Mountains in eastern Tennessee, including Gatlinburg. Driving conditions could be dangerous in this area.

Winter weather advisories have been issued in parts of the Plains, in the southern Appalachians and in portions of the Carolinas, where roads may be slippery at times. Cities currently in winter weather advisories include Raleigh, Charlotte, Asheville and Greensboro, North Carolina; Dodge City, Kansas; North Platte, Nebraska; and Sioux City, Iowa.

A winter storm watch is also in effect in northeastern North Carolina and southeastern Virginia, including Norfolk and Virginia Beach.

Snow may begin before the Thursday evening commute in parts of eastern Tennessee and North Carolina.

A February and Winter for the Record Books?

Rainfall has been nothing short of staggering so far in parts of the South.

Tuscaloosa, Alabama, picked up more rain in just the first 18 days of February (13.32 inches) than it measures in an average February and March combined (10.07 inches). In records dating to 1948, only one other winter month, February 1961 (14.79 inches), has been wetter in Tuscaloosa than February 2020.

According to the Southeast Regional Climate Center (SERCC), it was the wettest start to the month through Feb. 18 in Knoxville, Tennessee (10.21 inches); Greensboro, North Carolina (6.24 inches); and Elizabeth City, North Carolina (5.81 inches).

Knoxville was among a number of Southeastern cities that smashed February records last year.

It hasn't just been February, either.

The only wetter winter to date in Jackson, Mississippi (25.76 inches so far), was 1982-83, also the last time the Pearl River was as high in the city.

Haleyville, Alabama (32.15 inches), and Highlands, North Carolina (34.99 inches), have each picked up over 30 inches of precipitation since Dec. 1.

A number of locations from Mississippi to the Smoky Mountains have picked up 10 inches more precipitation than average in just over 2.5 months this winter. 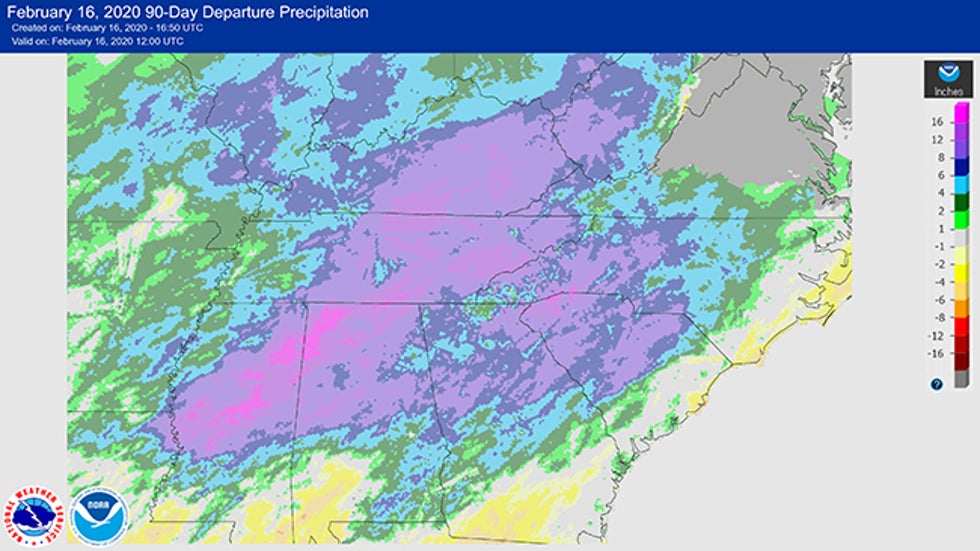 Departures from average precipitation over a 90-day period ending Feb. 16, 2020. Areas shown in the purple and pink contours have picked up at least 8 inches more precipitation than average during that time.
(NOAA/NWS)

Unfortunately, the break in the rain arriving Friday may be short-lived.

(MORE: Why Friday's Weather Map May Be Blank From Coast to Coast

Computer forecast models suggest more rain is likely to return to the South early next week, perhaps as soon as Sunday.