Bomb Cyclone Storm Dennis, One of the Most Intense North Atlantic Storms on Record, Triggers Massive Flooding in U.K.

Storm Dennis lashed the United Kingdom with flooding rain, high winds and battering waves after becoming one of the strongest North Atlantic bomb cyclones on record.

Sunday morning, just under 600 flood alerts and warnings were in effect in England, the most on record for any day there, according to John Curtin, Executive Director of Flood and Coastal Risk Management of the U.K. Environment Agency.

Among the hardest-hit areas was along the River Taff in Pontypridd, about 10 miles northwest of the Welsh capital of Cardiff, where photos and video showed the river had topped its banks early Sunday. Flooding was also reported along the river in parts of Cardiff.

Severe flood warnings were issued in four locations along the River Teme Sunday.

Winds gusted as high as 108 mph in Hellisskarð, Iceland, 105 mph over the Scottish highlands, 91 mph in the Welsh town of Aberdaron and 83 mph in northern France.

Dennis's central pressure plunged 84 millibars in 54 hours, to a low of 920 millibars by Saturday, according to analyses from NOAA's Ocean Prediction Center, easily satisfying the criterion for a bomb cyclone. The lower the pressure, the more intense the storm.

The all-time-lowest pressure on record for a North Atlantic storm was 913 millibars set in January 1993 near Scotland's Shetland Islands. This historic storm broke apart the super oil tanker Braer on a rocky shoal in the Shetland Islands, causing a massive oil spill, Burt noted. 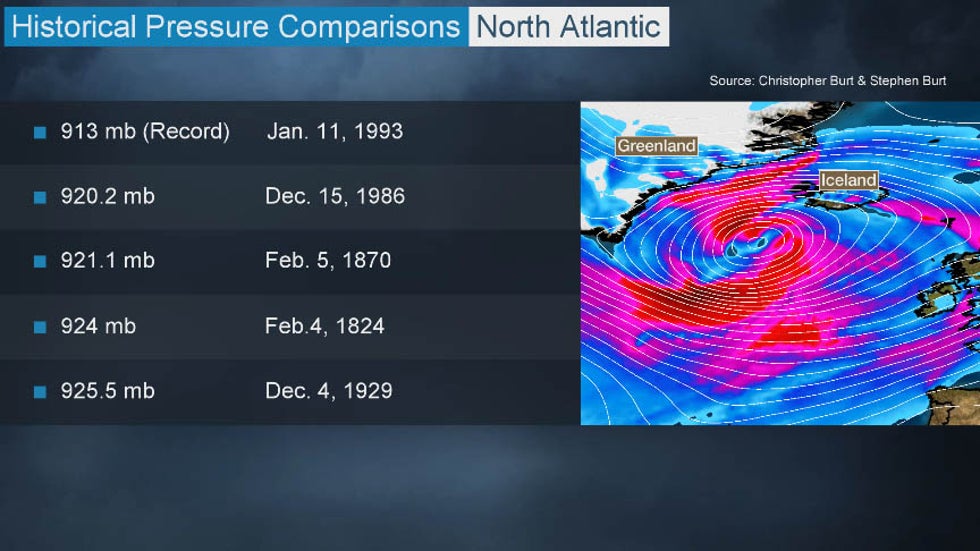 The middle of February is typically the peak of winter storm season in the North Atlantic, and Storm Dennis certainly fit right in.

Aside from the impressively low surface pressure forecast for Storm Dennis, there were a couple of other fascinating aspects to this.

First of all, the jet stream disturbance responsible for the development of Dennis was the same one that brought some snow and rain to the eastern United States last Thursday as a part of Winter Storm Mabel.

Another fascinating aspect to meteorologists was Storm Dennis's interaction with another strong North Atlantic low that preceded it and hammered Iceland last Thursday into early Friday. (We have more details on that first Icelandic storm below.)

As Dennis intensified, it tracked close enough to the first strong Atlantic low to perform a meteorological dance known as the Fujiwhara effect.

Named for Dr. Sakuhei Fujiwhara, the meteorologist who first described the phenomenon in 1921, this effect is the rotation of two weather systems around each other in close distance.

In this case, Dennis and the first storm completed a counterclockwise dance for a time, before the lows merged south of Iceland.

Infrared satellite loop from Feb. 13-15, 2020, indicates the twin North Atlantic storms. The first storm, which hammered Iceland on Feb. 14, is labeled by a light blue "1." The second storm, Storm Dennis, is denoted by a bold red "D."

As meteorologist Jonathan Belles wrote last February about another Fujiwhara case off the U.S. East Coast, these twin lows can either merge, as we expect with Dennis, or can release from each other and go their separate ways.

The Hafnarfjall weather station, about 20 miles north of Reykjavik, clocked a peak wind gust of 159 mph Friday morning, likely enhanced from nearby terrain. It also clocked gusts above 100 mph for six hours from 6 a.m. to noon local time, according to the Icelandic Met Office.

Winds along the southern coast of Iceland gusted from 80 to 90 mph Friday and peaked at 95 mph in northwestern Iceland. In the Icelandic capital, Reykjavik, winds gusted up to 70 mph Friday.

The Icelandic Met Office Thursday issued red alerts for only the second time since 2017 for high winds along the southern and western coasts of Iceland, mentioning some wind gusts along the coast could top 200 kph, or 124 mph, in this first storm. These alerts were downgraded to yellow alerts by early Saturday.

According to Iceland's Channel 2 and Vísi, one man was injured when a roof was damaged in Hvalfjörour, and wind sensors were knocked out of service due to the ferocity of the winds.

Late Thursday night, a satellite estimated a wave height of 64 feet several hundred miles west of the Irish coast, whipped up by strong winds from this first storm.

This storm battering Iceland became a bomb cyclone, with a pressure drop of 67 millibars in 48 hours from an area of low pressure off Nova Scotia just after midnight EST Wednesday morning to a 929-millibar beast near Iceland early Friday morning, according to analyses from NOAA's Ocean Prediction Center.