As tornadoes and straight-line winds blew off roofs and destroyed buildings Tuesday night in Sioux Falls, South Dakota, most of the city's warning sirens failed to sound.

Sioux Falls Mayor Paul TenHaken said Wednesday that the problem was caused when an employee in the city's 911 dispatch center didn't follow the proper procedure to initiate all 77 of the city's warning sirens, the Argus Herald reported. Instead, only one quarter of them were activated.

"Quite honestly what happened with the system is we just had a human error issue," TenHaken said.

In a morning press conference, he had called the incident with the outdoor warning system a "breach of protocol" and said the city was investigating, according to the Associated Press.

Most of the sirens were sounded in the southwest part of the city, which sustained much of the major damage, TenHaken said. But sirens are supposed to sound city-wide.

"We're doing an internal investigation on why that happened, why the existing protocol was not followed," TenHaken told the Argus Leader. "The city recognizes that, is owning that, and we'll be taking the proper steps to rectify that."

Todd Heitkamp, the meteorologist-in-charge at the Sioux Falls National Weather Service, told the newspaper it's important to note that outdoor warning sirens aren't specifically tornado sirens. The system is intended to warn people who are outside that a life-threatening situation is happening.

"I can tell you from my stance last night, I heard the siren only because I stood outside wondering what was going to happen right before the storm hit my house," Heitkamp said.

A preliminary survey from the National Weather Service confirmed that three EF2 tornadoes had touched down, with estimated winds ranging from 125 mph to 130 mph. The NWS said eight people were injured.

Some people were trapped under collapsed structures and had to be rescued, according to the Argus Leader. Downed trees and powerlines hindered emergency response in much of south Sioux Falls.

Homes and a hospital were damaged in southern sections of the city.

Avera Behavioral Health Hospital had a portion of its roof torn off by the storms, according to the Argus Leader. Seven patients from the hospital were transported to Avera Heart Hospital, spokeswoman Michelle Pellman told the Argus Leader. 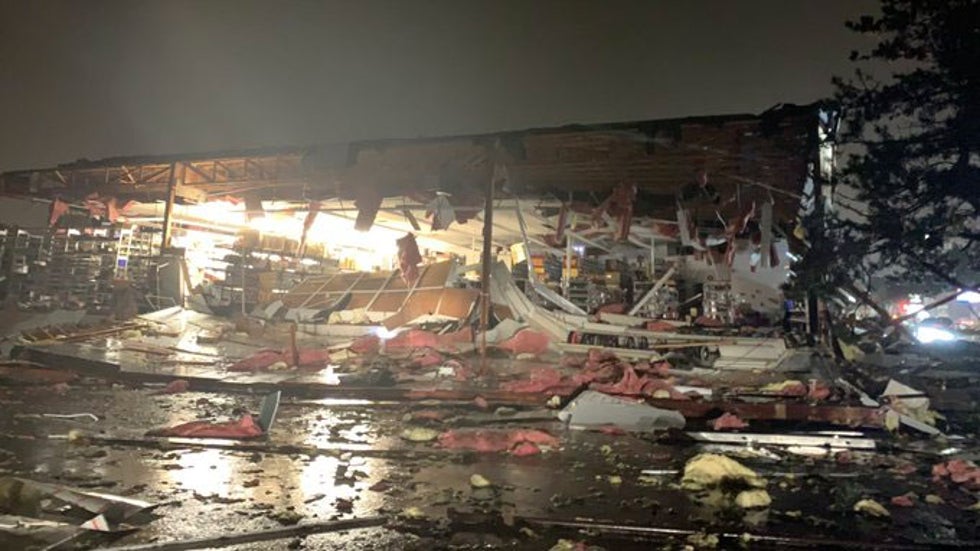 "Based on early assessments, the area of Sioux Falls that received the great impact from the overnight storm is bordered by 26th Street on the north, 85th Street on the south, Marion Road on the west and Minnesota Avenue on the east," the Sioux Falls Fire Department tweeted.

Sioux Falls Police issued a no travel advisory early Wednesday because debris, including trees and power lines, covered many roads in the area.

More than 8,200 Xcel Energy customers in Minnehaha County remained without power as of 10 a.m. CDT.

More severe storms and heavy rain could impact the area on Wednesday and Wednesday night before cooler, drier conditions move in on Thursday.