This week is the statistical peak of the Atlantic hurricane season: When the Atlantic has had the most hurricanes and named storms over the course of history.

But this seasonal peak isn't simply useless statistics. It illustrates that this is the time of year when conditions are most optimal for the development of tropical storms and hurricanes.

There's an overlap of favorable factors in early-mid September, including ocean water reaching its highest temperature, the atmosphere's ability to generate thunderstorms hitting its peak, hostile shearing winds declining to a minimum and a parade of disturbances known as tropical waves acting as seeds for development that, while peaking in July, are numerous in September.

These overlapping favorable factors also occur over a larger area of the Atlantic Basin compared to early and late in the season. So there's more real estate open for tropical development during the seasonal peak.

Typical origin areas and tracks of September named storms and hurricanes. Areas most prone are denoted by the darker red and orange contours.

All of those factors lead to more named storms and hurricanes during the statistical peak of hurricane season, as shown in the graph below. 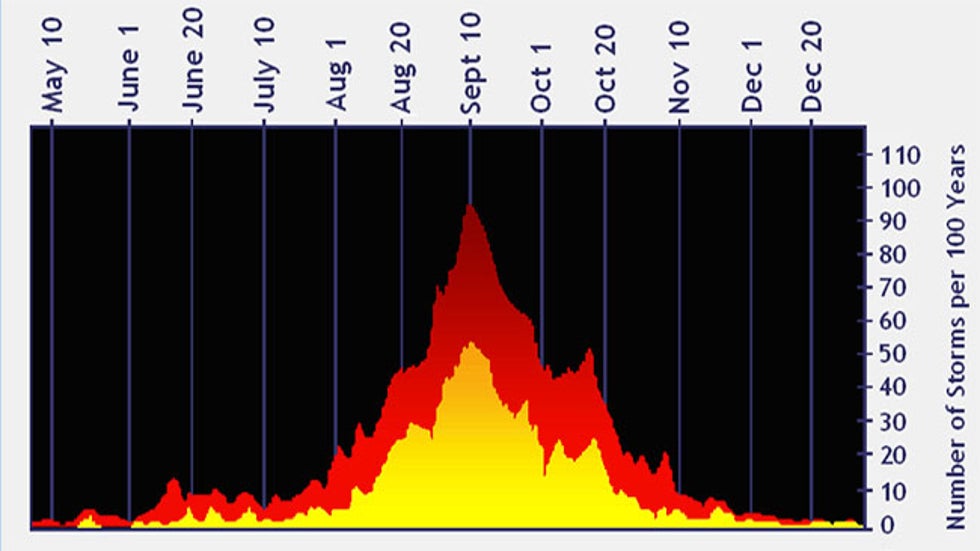 The average number of named storms (red) and hurricanes (yellow) per 100 years active on each day of the Atlantic hurricane season.
(NOAA/National Hurricane Center)

The graph indicates the number of active named storms and hurricanes on each day of the Atlantic hurricane season in the historical record.

It clearly shows the three month period from August through October encompasses the majority of named storms (77 percent) and hurricanes (87 percent) in an average season.

It also shows a distinct peak day with the most active named storms and hurricanes is September 10.

This doesn't guarantee every September 10 will have a rash of Atlantic named storms. This year, for example, we only had one storm - Gabrielle - that became a post-tropical cyclone by late morning.

How Much of the Season is Left?

There have been 7 named storms so far this season, 2 of which became hurricanes: Barry and Dorian.

An average hurricane season would produce another 5 named storms, including 4 hurricanes, 2 of which reaching at least Category 3 intensity. 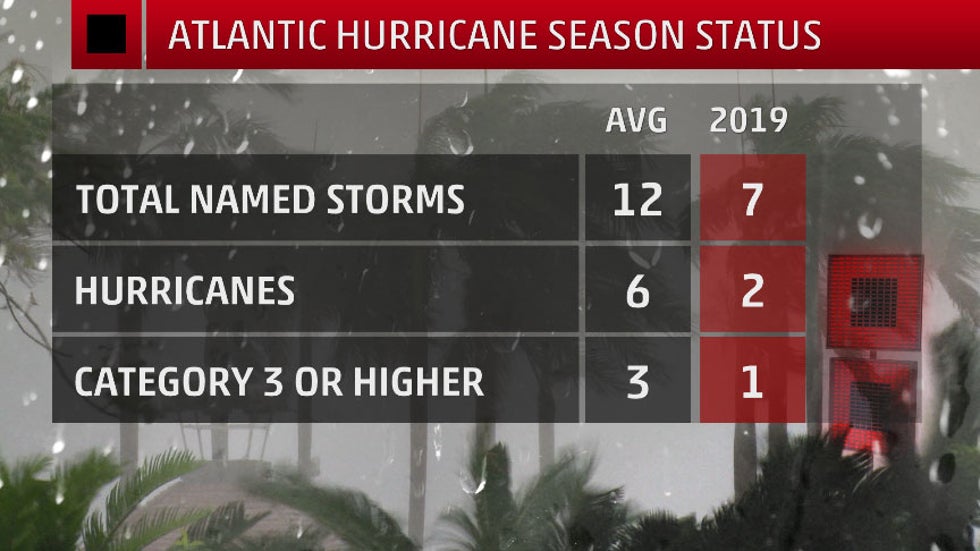 In 2018, another 6 named storms formed after the September 10 peak, half of those becoming hurricanes.

Of course, the most important statistic is how many of these named storms and hurricanes strike land.

Later in the season, development can occur closer to land in the western Caribbean Sea, southwest Atlantic Ocean and Gulf of Mexico. Last October's devastating Category 5 Hurricane Michael was a stark example.

There's still a long way to go. So far this decade, the season's last storm fizzled as soon as October 25 and as late as December 7.

Now is the time to make sure you have a hurricane plan in case another storm threatens this season.