Water service has been restored on North Carolina's Ocracoke Island, but residents there were still without power Monday morning as generators, fuel, food and other supplies were rolling in via ferries.

The island was still under a boil-water notice, and shower trucks have been set up at a campground, according to the Ocracoke Observer. Ocracoke's only school is closed until further notice.

"Some of the rooms still have standing water,” Tom Pahl, Ocracoke’s county commissioner, told the newspaper. "It’s a mess and needs to be cleaned up as soon as possible."

(MORE: Bahamas Death Toll Rises to 45, But Newspaper Says It's in the Thousands

No one knows when electricity will return, but plans are in the works to turn on a village-wide generator that has been used before after similar long-term power outages.

Donnie Shumate, emergency management spokesman for Hyde County, which includes Ocracoke, said most of the water had receded and clean up had begun.

"Flood waters are mostly gone. The clean up process is still ongoing," Shumate told weather.com in an email Monday afternoon. "People are tired but getting through it. We have a lot of resources on the ground and making sure everyone has food and water available. Disaster counselors are on site for anyone that needs them and the Health Department is setting up a clinic tomorrow for shots and other services."

While those who ignored mandatory evacuation orders and stayed on the island are still there, those who left were unable to return until officials gave them the all-clear on Monday.

The North Carolina National Guard as well as county and state agencies and nonprofit groups were assisting in the clean up and recovery.

Storm surge rose up to 7 feet on Ocracoke as Dorian moved up the East Coast and made landfall at Cape Hatteras. About 800 residents of Ocracoke had stayed behind to ride out the storm in the 4-square-mile village at the island's southern end. Most of the rest of the island is uninhabited national park land.

The water flowed through homes and other buildings, and forced some residents to seek shelter in the upper levels of their houses. Many said the flooding, and its aftermath, were the worst they'd ever seen. 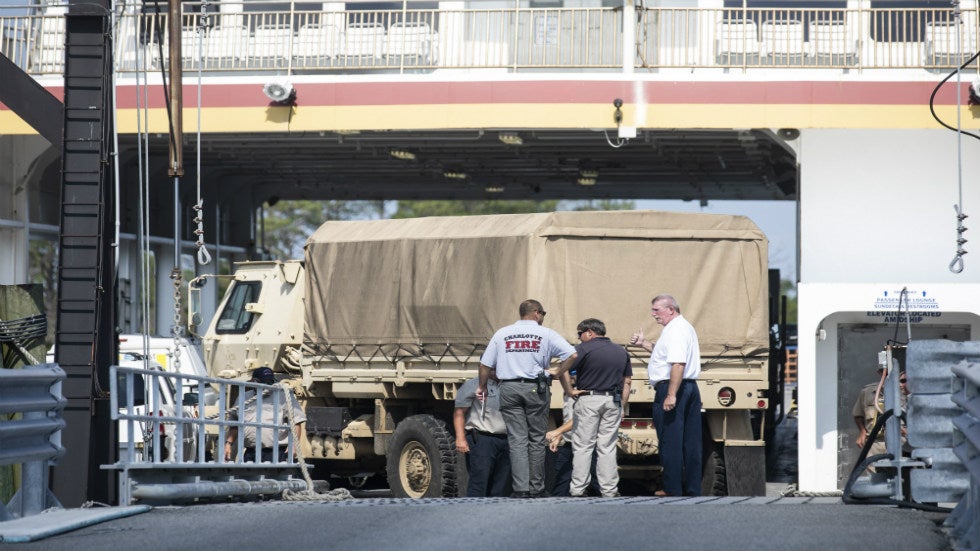 A North Carolina National Guard truck is loaded onto the Swan Quarter Ferry in Swan Quarter, North Carolina, on Saturday, Sept. 7, 2019. Several ferries from around the area will be running supplies to Ocracoke Island, which was devastated by Hurricane Dorian.
(Julia Wall/The News and Observer via AP)

Joyce Gordon, 83, told the New York Times she nervously drank wine and paced through her home as the water rose. Neighbors debated whether they should rescue her by boat, while Gordon said she was having second thoughts about her decision not to evacuate.

Jade Lopez told the Times she, her husband and two small children lost everything, including their trailer home and the taqueria business they had opened last year. Unlike many of those who have lived on the island for years and have federally backed flood insurance, the Lopez family had no coverage on their trailer or business.

Lopez came to Ocracoke from Mexico as a teen, after an aunt who cleaned houses on the island told her about opportunities there, according to the Times. She's not sure what the future holds, and doesn't think her family will stay in the place she came to looking for a better life.