Dorian is rapidly moving through Atlantic Canada with damaging winds and destructive waves.

The center of the eye made landfall in Sambro Creek, Canada at 6:15 p.m. AST. The eye of Dorian reached Halifax around 6:30 p.m. Saturday. Winds calmed across the city and water receded temporarily.

Dorian is becoming a large mid-latitude cyclone, but it will still bring hurricane-force winds to parts of eastern Canada.

Dorian is rapidly approaching the city of Halifax, where wind gusts have been over 60 mph.

At least one crane collapsed in Halifax as wind gusts increased.

Storm surge and high seas are battering the Canadian coast.

Dorian is a very large and continually growing hurricane-strength system.

Here is a rundown of the current watches and warnings, according to the National Hurricane Center:

-A hurricane warning means hurricane-force winds (74-plus mph) are either already occurring or expected somewhere within the warning area, generally within 36 hours. Preparations to protect life and property should be rushed to completion.

-A hurricane watch means that hurricane-force winds (74-plus mph) are possible within the watch area, within 48 hours.

Below is the latest forecast of Dorian's timing and impacts.

Sunday: Dorian will move east-northeastward rapidly through eastern Canada. Heavy rain and strong winds will continue in parts of Newfoundland and Labrador.

Storm surge is likely in the Gulf of St. Lawrence, the southwestern coast of Newfoundland and eastern Nova Scotia on Saturday.

Here are the latest rainfall projections from the National Hurricane Center and NOAA's Weather Prediction Center:

Check back to weather.com for the latest on Hurricane Dorian.

Here is a rundown of some peak wind gusts and rainfall totals from Dorian in the U.S., according to the National Weather Service: 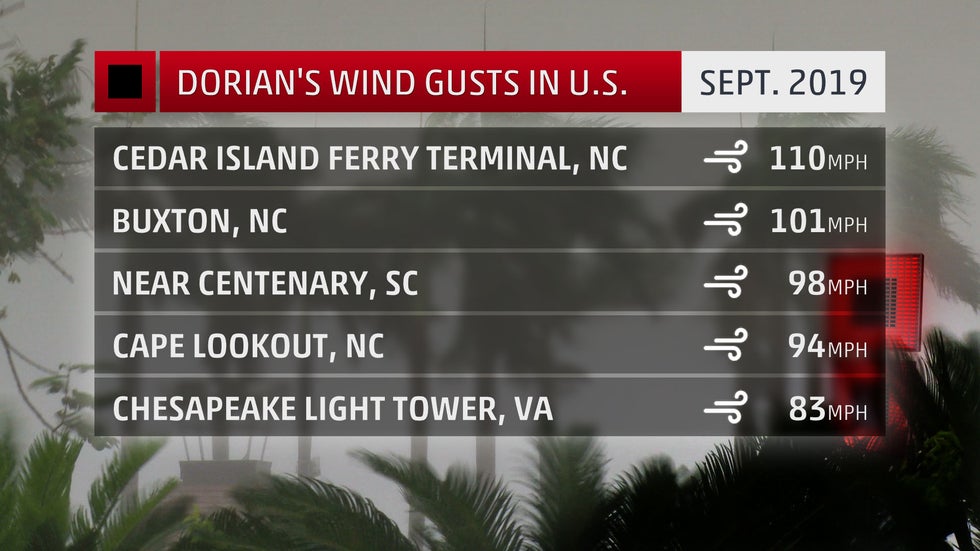 Wind gusts from Hurricane Dorian in the U.S. 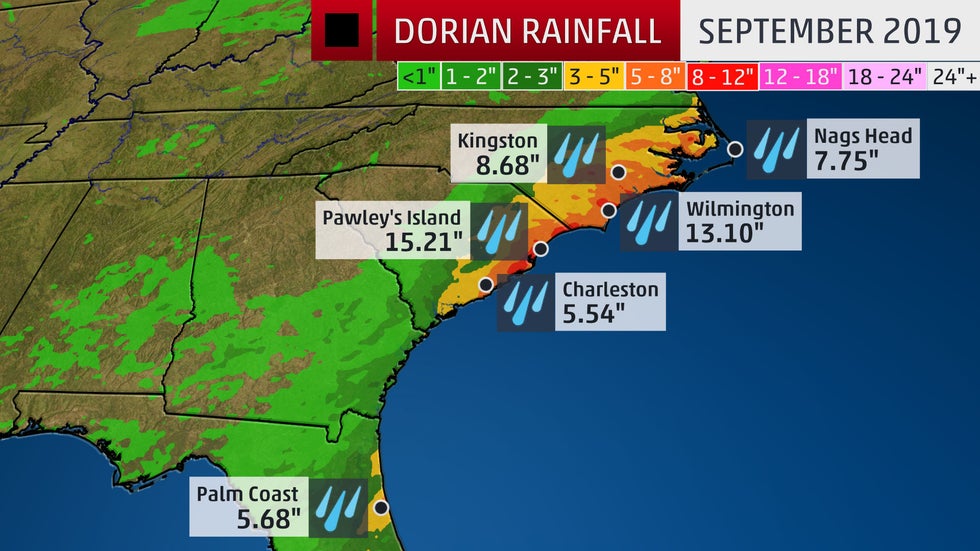 Dorian was upgraded to Category 5 status on September 1 and became the first hurricane of that intensity to make landfall on Grand Bahama Island, after first making a pair of landfalls in the Abacos Islands of the northwestern Bahamas earlier in the day.

(MORE: The Rarity of Category 5 Hurricanes

According to Robert Rohde, lead scientist at Berkeley Earth, while over the northwestern Bahamas, Dorian was also the slowest-moving major hurricane (Category 3 or stronger) on record in the Atlantic Basin, crawling at just 1 to 2 mph averaged over a 24-hour period.

Dorian's eyewall finally moved away from Grand Bahama Island on the afternoon of September 3 after pummeling the island for 41 straight hours with destructive winds and catastrophic storm-surge flooding.

In total, this intense hurricane's eyewall lashed the northwestern Bahamas for an astonishing 51 straight hours since first beginning its siege on the Abacos Islands on the morning of September 1.

On August 23, the National Hurricane Center first highlighted the incipient tropical wave that would become Dorian when it was about 1,400 miles east of the Windward Islands.

It became a tropical depression, then tropical storm the following day.

Tenaciously fighting off dry air, Dorian held together as it swept through the Windward Islands on August 26 and 27, dumping flooding rain in Martinique.

After moving over St. Lucia, the center of Dorian reformed farther north, something not uncommon in weaker tropical storms and depressions moving over mountainous terrain fighting dry air.

This northward reforming center eventually became better organized and intensified to a hurricane as it tracked through the Virgin Islands on August 28. An elevated weather station on Buck Island just south of St. Thomas reported a sustained wind of 82 mph and a gust to 111 mph. Quite an impressive change since staggering through the Windward Islands.

Dorian then intensified to a Category 4 hurricane by August 30, when hurricane warnings were first issued in the northwest Bahamas.

The increasingly formidable hurricane generated frequent lightning, as seen both from the GOES-East satellite and from a Hurricane Hunter mission overnight on August 31.

By September 1, Dorian topped out at Category 5 intensity, then began its catastrophic lashing of the Abaco Islands in the Bahamas.

Sustained tropical-storm-force winds (39-plus mph) arrived at Juno Beach, Florida, on Labor Day and continued along parts of the northeastern Florida coast through September 4, with gusts topping 60 mph at times.

While Dorian's most intense winds largely missed the Florida coast, there were destructive coastal impacts.

Major beach erosion occurred at Flagler Beach, according to the National Weather Service. The Weather Channel meteorologist Jim Cantore documented damage to homes on Hutchinson Island due to pounding surf.

Major beach erosion was also reported in Vero Beach, according to WKMG-TV. Flooding of streets and parking lots was reported on barrier islands near Fort Pierce at high tide.

Water levels were 3 inches over the seawall at Palm Coast.

There have also been reports of trees down in parts of central South Carolina, along Interstates 95 and 26.

The combination of rainfall flooding plus flooding from storm surge prompted the closing of over 50 streets in Charleston, South Carolina, according to local emergency management.

Surge flooding was much lower than forecast, due to winds still blowing offshore as the center of Dorian remained just far enough to the east and offshore of Charleston.

There have been 23 reports of tornadoes in the Carolinas on September 5, some of which were damaging.

Homes were damaged near Carolina Shores, North Carolina, from another apparent tornado, and law enforcement sighted a tornado in North Myrtle Beach, South Carolina, where condos and a trailer park were damaged.

After midnight on Sept. 6, multiple stretches of Interstate 40 were reported flooded near the Sampson-Duplin County line north of Turkey, North Carolina. Fifteen roads were closed in Sampson County due to flooding and one section of a road was reported washed out near Clinton.

Dorian made landfall over Cape Hatteras, North Carolina, at 8:35 a.m. EDT with maximum sustained winds of 90 mph and a central pressure of 956 millibars. 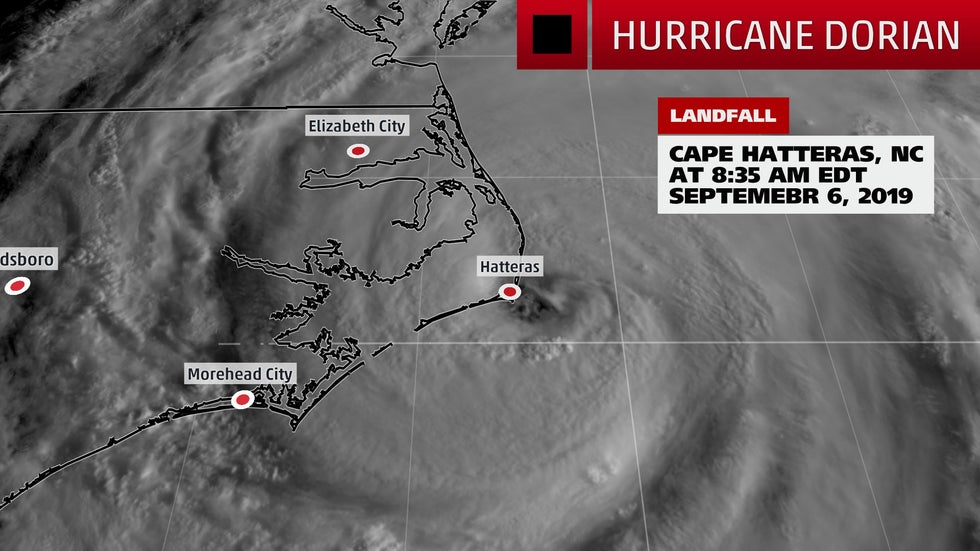 The backside of Dorian brought a storm surge from Pamlico Sound to North Carolina's Outer Banks on Sept. 6 resulting in a rapid rise in water levels at Ocracoke and Hatteras. A flash flood emergency was issued by the National Weather Service for Hyde and Dare counties.

The water level reached 6.37 feet at Ocracoke Friday morning and Hatteras saw its second highest water level on record, 5.32 feet, the record level was set during Hurricane Matthew in 2016.

Flooding was reported midday Friday in southeastern Virginia, including in Norfolk and Sandbridge.

A sustained wind of 83 mph with a gust to 98 mph was reported late Friday morning at Avon Sound, North Carolina, according to the National Hurricane Center (NHC).

Cape Lookout, North Carolina, reported one-minute sustained winds of 81 mph, with a gust to 94 mph early Friday morning, according to the NHC.

Sustained winds of 83 mph with a gust of 98 mph was reported midday Friday at Jannette Pier, North Carolina.

Tropical storm conditions were reported in southeastern Massachusetts early Saturday. Sustained winds of 64 mph with a gust to 80 mph was reported Saturday morning from a buoy near Nantucket. Winds gusts of 63 mph have been measured in Provincetown and up to 60 mph in Wellfleet.

Trees and power lines have come down in several locations across Cape Cod.

The map below shows a history of Dorian's track.