The Atlantic hurricane season may continue its slumber through the rest of August for the first time in over 20 years, a newly released forecast says.

Below-average tropical cyclone activity is forecast in the Atlantic Basin through Sept. 1, according to the latest short-term tropical outlook released Monday by Colorado State University.

The team, headed by Phil Klotzbach, said vertical wind shear – the change in wind direction and speed with height that can rip apart tropical disturbances and storms – is "forecast to be fairly low" by late-August standards in parts of the basin.

However, abundant dry, sinking air – another hostile factor that has recently suppressed activity in the central and eastern Atlantic Basin – is forecast to persist through the next two weeks, the CSU outlook said.

This dry air squelches the atmosphere's ability to generate persistent thunderstorms near an area of low pressure, the first step to develop a tropical storm or hurricane. 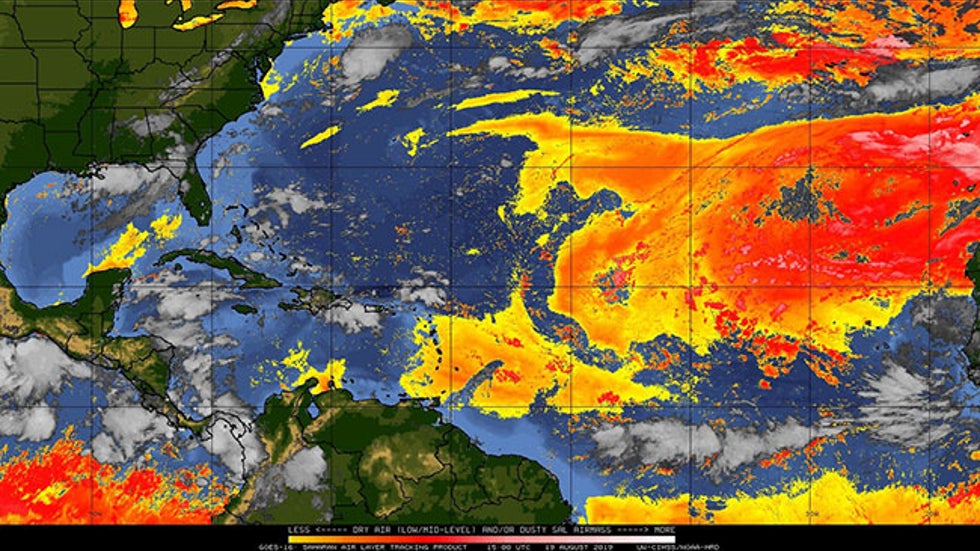 This analysis from Aug. 19, 2019 shows expansive dry air over the central and eastern Atlantic Ocean, reaching into parts of the Caribbean Sea, shown by the yellow, orange and red contours.
(University of Wisconsin Cooperative Institute for Meteorological Satellite Studies)

(MORE: What Is the MJO and Why Does It Matter?)

If you haven't heard much about the hurricane season since Barry, it's not your imagination.

Tropical Depression Three briefly spun up off the South Florida coast a week after Barry in late July. Other than that small blip, the Atlantic Basin has been a ghost town over the past month. 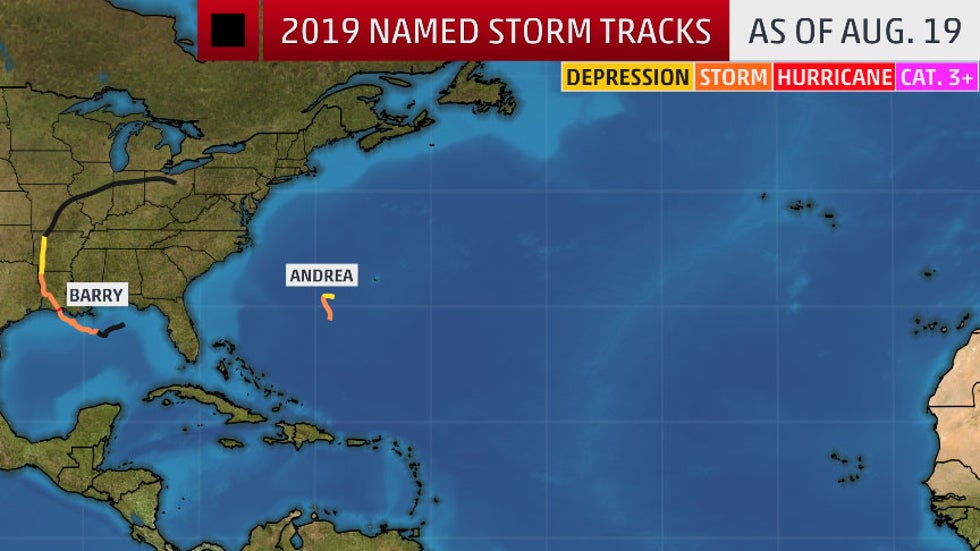 Tracks of named Atlantic storms in the 2019 Atlantic hurricane season, through Aug. 19. (Note: Black segments of Barry's path were when Barry was a remnant over the Midwest and before Barry was designated a tropical storm over the northern Gulf of Mexico.)
(Track data: National Hurricane Center)

Klotzbach noted it was the first time in 20 years without an Atlantic named storm from July 15 through Aug. 18.

August failed to generate a single Atlantic storm only twice since 1950 – in 1961 and 1997 – according to NOAA's best track database.

Only eight storms developed in the 1997 season, three of which became hurricanes.

A strong El Niño developed that summer and suppressed the number of storms, particularly in the Caribbean Sea. Hurricane Danny did landfall along the northern Gulf Coast in July 1997, however, illustrating that the number of landfalls are not correlated to the number of storms. We'll come back to that important point later.

Three storms have formed each August, on average, over the past 69 years. One or two of those later would become hurricanes, with one becoming at least Category 3 intensity in a typical August.

Recent Augusts have been much more active.

Given no expected tropical development over the next few days, Klotzbach noted 2019 will have the least-active start to the season in 17 years.

Entering the Heart of the Season

Despite the slow start, a large majority of the hurricane season remains ahead.

September is typically the most active month of the season. Of the 789 total Atlantic Basin storms in a 69-year period since 1950, one-third of them – 261 storms – have formed in September. 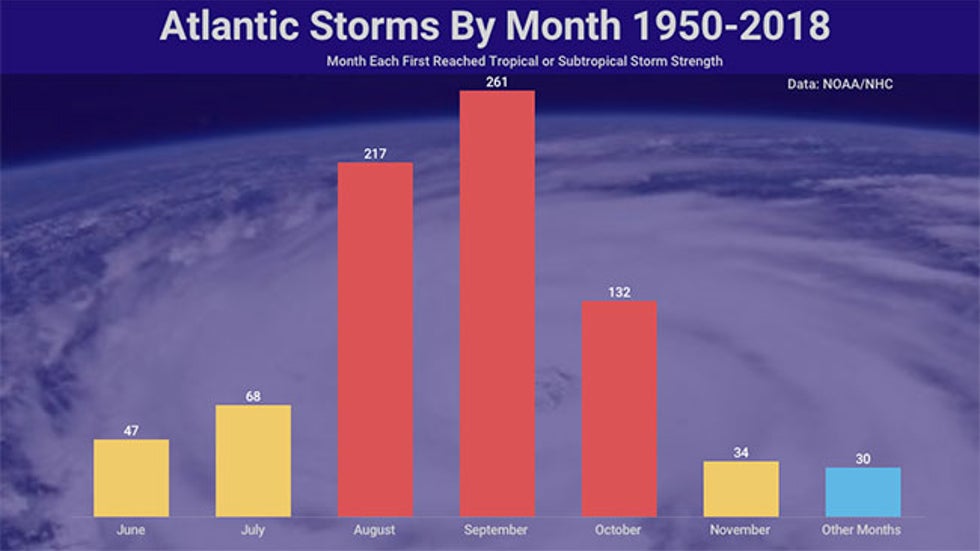 The number of storms that have formed by month from 1950 through 2018. September is the peak month, followed by August and then October.
(Data: National Hurricane Center)

This seasonal peak is due to a confluence of factors, including oceans reaching their warmest temperatures, the atmosphere's ability to generate thunderstorms hitting its peak, a minimum of hostile shearing winds and a parade of disturbances known as tropical waves acting as seeds for development. This opens up a large area of the Atlantic Basin for development, compared to early or late in the season.

About 85 percent of Atlantic tropical storm or hurricane activity occurs after Aug. 19, on average, according to data compiled by Klotzbach.

The Weather Company chief meteorologist Todd Crawford noted a correlation since 2003 between the number of named storms before and after mid-August. This would suggest the total number of storms in 2019 may either end up near or below the long-term average of 12 named storms.

But, as is almost always the case, there are outliers.

Crawford noted the 2010 hurricane season also started out rather docile through mid-August, but then erupted for 16 named storms, 11 hurricanes and five Category 3-plus hurricanes from late August on. Only persistent steering winds that pushed storms away saved the East Coast from the likes of Hurricane Earl in 2010.

Another hurricane season that was 0-for-August, 1961, turned active abruptly by September.

Ten storms, seven of which became hurricanes, flared up the rest of that season, including Hurricane Carla, which clobbered the Texas coast, and a brush from Hurricane Esther in coastal New England.

Most importantly, the number of storms and hurricanes do not correlate to how many strike land.

We could have a number of destructive strikes, as we've seen the past three seasons, or no strikes at all, depending on where each storm forms and the steering currents in the atmosphere at the time the storm is active.

That's why residents in hurricane-susceptible parts of the Atlantic Basin shouldn't let their guard down if any season starts out relatively slow. Now is the time to refresh or develop a hurricane plan.