The week ahead is expected to be hotter than average for much of the United States, reminding us that the "dog days" of summer aren't quite over yet.

The first half of the month was relatively cool in parts of the Midwest and Northeast, where lows dipped into the 40s and 50s late last week into last weekend behind a cold front. Some trees even starting showing early signs of fall color in the nation's northern tier.

(MORE: Signs of Fall That Can Appear in August

But it's still summer, and the atmosphere will act like it in August's latter half.

The jet stream will retreat northward to the U.S.-Canada border as a broad upper-level ridge of high pressure develops over the southern tier of the United States. As a result, hotter-than-average temperatures will grip many locations in the Lower 48 by next week. 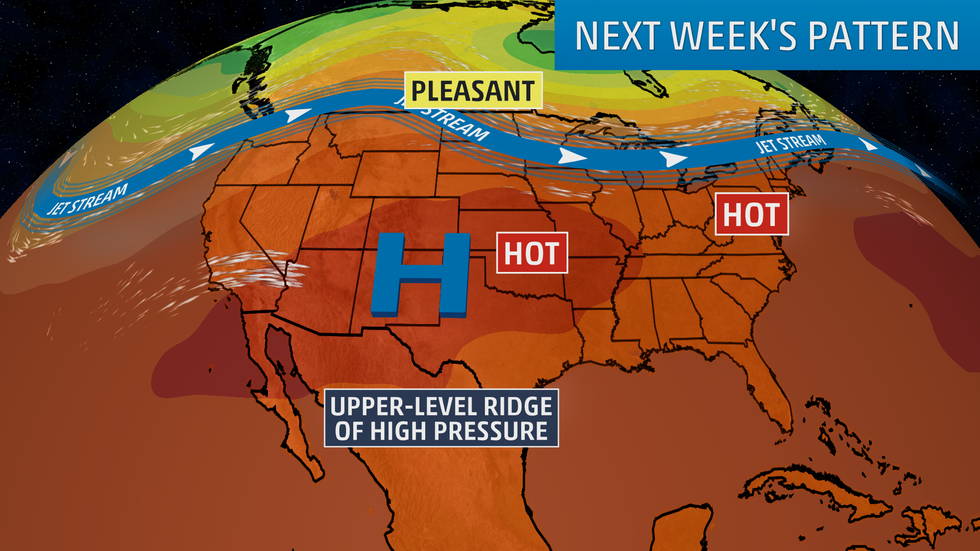 Above-average temperatures will return to much of the United States next week as the jet stream sets up near the U.S.-Canada border and an upper-level ridge of high pressure develops over the nation's southern tier.

For most cities in the Northeast and Midwest, that translates to highs in the 80s and lower 90s with lows in the 70s. This includes the Boston-Washington, D.C., corridor.

While this is not oppressive heat, it will be a noticeable change from the bout of cooler temperatures in early August. Add in a bit more humidity, and it will feel quite uncomfortable at times.

When the Southwest is above average in August, you can always expect dangerously hot temperatures in that part of the country. The National Weather Service has issued excessive heat warnings for parts the region this weekend, including Phoenix and Tucson.

Triple-digit heat will sear most cities from southeastern California and southern Nevada into southern Arizona, southern and eastern New Mexico, Texas and even parts of Kansas and Oklahoma. Highs in the mid- to upper 90s can be expected along the Front Range of the Rockies and the adjacent central High Plains.

There should be some relief overnight as lows fall back into the 70s or upper 60s for most, except the hottest portions of the Desert Southwest, where temperatures will likely remain in the 80s through the night.

(MORE: 4 Things Extreme Heat Does to Your Body

Temperatures will increase a bit midweek in the Southwest and a few daily record highs are possible.

Some relief from the heat is ahead in parts of the U.S. as cooler conditions will return to the Midwest and East by late next week.

Parts of the West, however, can expect above-average temperatures to persist into the last week of August.

Looking farther into the future, the fall temperature outlook from The Weather Company, an IBM Business, predicts above-average temperatures will dominate the East Coast in September. The best chance for a cooler-than-average start to fall is in parts of the northern and central Rockies, as well as the adjacent Plains.