Hurricane season has been in a slumber for a few weeks, and much of the Atlantic Basin will remain quiet in the second full week of August. But a front stalling out near the Gulf and Southeast coasts bears watching for heavy rain.

The current satellite view of the entire Atlantic Basin shows no areas of concern for tropical development.

Dry air is abundant in the tropical Atlantic Ocean right now, as illustrated in the yellow and orange shadings of this analysis from the Cooperative Institute for Meteorological Satellite Studies. Dry air suppresses the chance for thunderstorms to develop and persist in disturbances crossing the Atlantic. 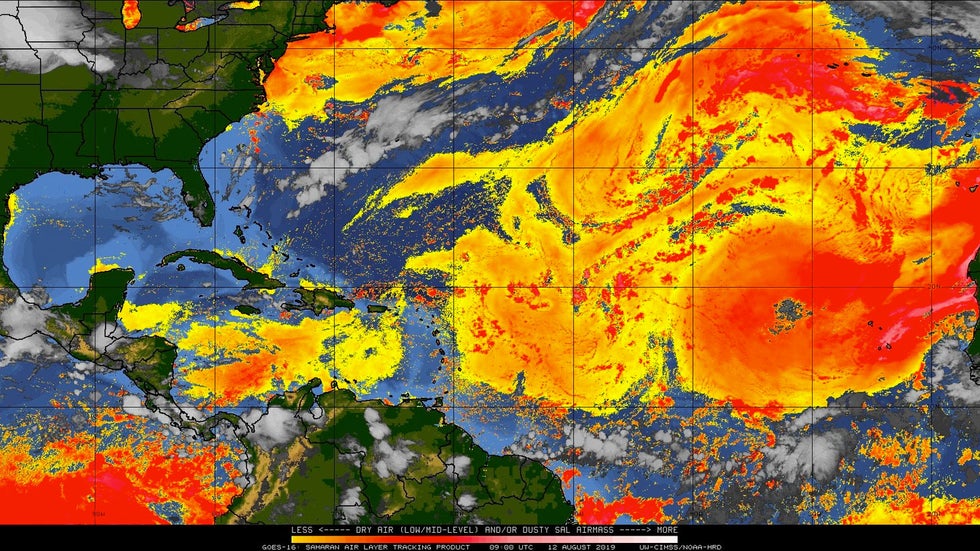 Yellow and orange shadings show the dry air in place across a large portion of the Atlantic on Monday.
(Cooperative Institute for Meteorological Satellite Studies)

Strong upper-level winds will also hinder tropical development and prevent any thunderstorm activity associated with tropical disturbances crossing the Atlantic from organizing and persisting long enough to develop into a tropical depression or storm.

Just because conditions are calm right now doesn't mean it won't get busier in the weeks ahead. On average (1981-2010), more than 80% of the named storm and hurricane activity that occurs in the Atlantic in a given season is still ahead, according to statistics compiled by Dr. Phil Klotzbach, a tropical scientist at Colorado State University.

Even though the large-scale weather pattern in the Atlantic is unfavorable for tropical development into the weekend, a stalling front near the Gulf and Southeast coasts will still be watched.

Stalled fronts near the southern U.S. coastline this time of year can add spin to atmosphere, and that can occasionally lead to slow development of a tropical depression. The chance of that happening with this front late in the week into this weekend is very low, but we'll continue to monitor it for the possibility the next several days.

Regardless, locally heavy rain will occur near the front later this week into the weekend. That rainfall could eventually trigger some flash flooding near parts of the Gulf and Southeast coasts. 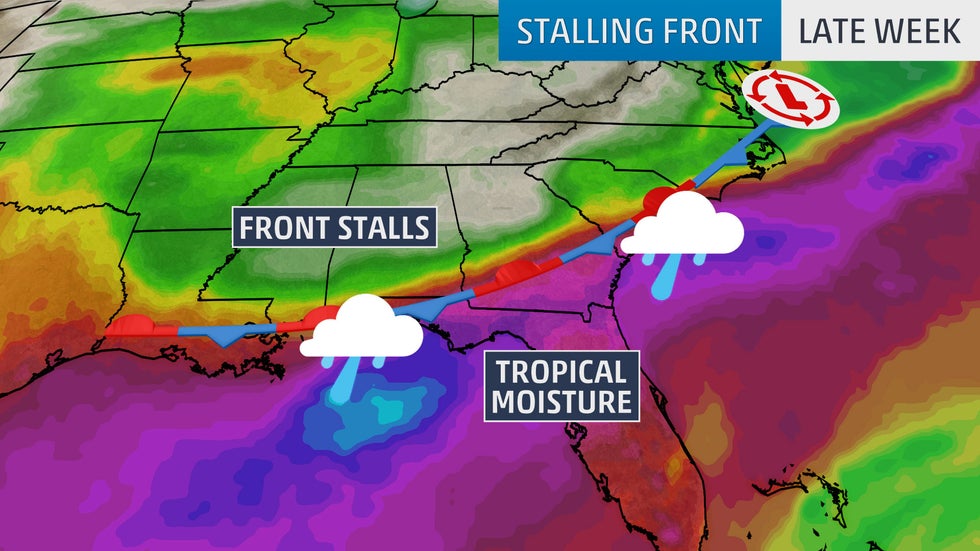 A front will stall near the Southeast and Gulf coasts, where it will interact with tropical moisture and produce locally heavy rain.

Check back with weather.com over the next few days for updates.