When Hurricanes Dance: How Trochoidal Wobble Saved Some Japanese Islands From the Worst of Typhoon Lekima

One of Japan's southernmost cities was on track to suffer the worst of Super Typhoon Lekima's eyewall on Thursday, but in the 11th hour, the cyclone had other ideas – and a quirky phenomenon called a trochoidal loop pushed Lekima's worst just north of the city of Ishigaki.

So what is a trochoidal loop? Trochoidal motion is essentially a circular motion that itself moves forward along a linear path.

This type of motion is often referred to when describing waves in the ocean. Energy propels waves toward the coast, as the waves themselves move up and down. Here's an example.

In the case of Lekima, as the storm moved northwest toward Japan's Ryukyu Islands, the typhoon's eye and eyewall carried out a trochoidal loop, wobbling from left to right and back like a wave on its side.

So why did this trochoidal wobble occur?

Wobbles like this one are caused by eyewall replacement cycles. That's a fancy way of saying that a typhoon needs to shed its skin, or in this case an old eyewall.

On approach to Ishigakijima, Japan, Typhoon Lekima was beginning the process of replacing its inner or older eyewall.

Remember a hurricane or typhoon is essentially a big moving truck filling with mass – air, rain, cloud droplets, and even ice crystals high up – that acts like a spinning top.

Normally these spinning tops move along in one direction, with any turns being graceful and gradual. But when you disrupt that spinning top, some very weird things can happen.

If you disrupt the most violent part of a hurricane – its eyewall - then you shake the whole spinning top.

This is what happens sometimes during eyewall replacement cycles, when you often see wobbles to the left and right of the expected track.

In the animation at the top of the article, you'll see that forecasters had a hard time keeping up with the location of Lekima's center as it moved northwestward. These wobbles are notoriously hard to forecast, and can shift the forecast several dozen miles in any direction as they occur. 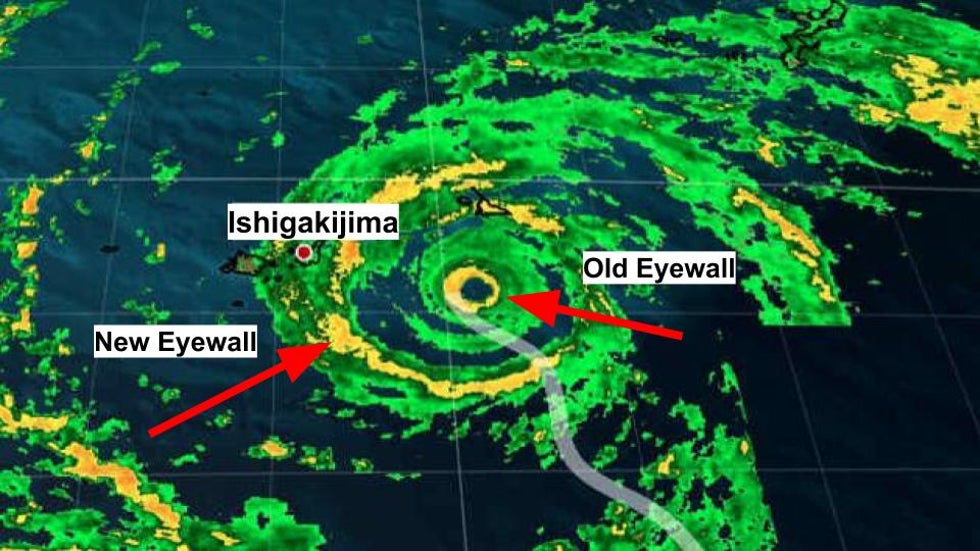 In the case of Lekima, the inner eyewall got thrown around a bit inside of the new eyewall.

In fact, the worst of Lekima stayed well north of Ishigakijima because of these wobbles. The outer eyewall, though, did produce extreme conditions over Japan's southernmost islands. Sustained winds of 75 mph were recorded at Miyako Shimojishima Airport along with wind gusts over 100 mph. More than 10 inches of rain fell.

Other Notable Examples of Trochoidal Wobbles

A small eastward wobble saved much of the east coast of Florida from the devastation of Hurricane Matthew's winds in 2016.

That slight wobble kept the center of Matthew and much of its eyewall just to the east of Florida as it curled northward parallel to the coastline.

Matthew's severe winds did however slam the part of Florida's coastline that pokes out into the Atlantic, Cape Canaveral, sustained winds to at least 96 mph are thought to have occurred.

Of course, this was just the impact of extreme winds. There was damage due to storm surge, beach erosion and high waves along much of Florida's coastline.

Hurricane Wilma, the most intense hurricane on record for the Atlantic basin, also went through a wobbly phase in the southwestern Caribbean. Wilma set multiple Atlantic records for rapid strengthening, including the shortest amount of time from tropical depression to Category 5 hurricane – just 24 hours.

Wilma began to wobble as its central pressure dipped toward a record low of 882 mb. This trochoidal wobble likely wasn't due to an eyewall replacement cycle, but rather just the mass in the hurricane trying to find a balance during and after Wilma's explosive intensification period.

Historically, the dramatic wobbles that are now observed in radar and satellite imagery were often smoothed out for the record books.

One such case was Hurricane Carla in 1961, which was tracked by radar wobbling off the Texas coast. 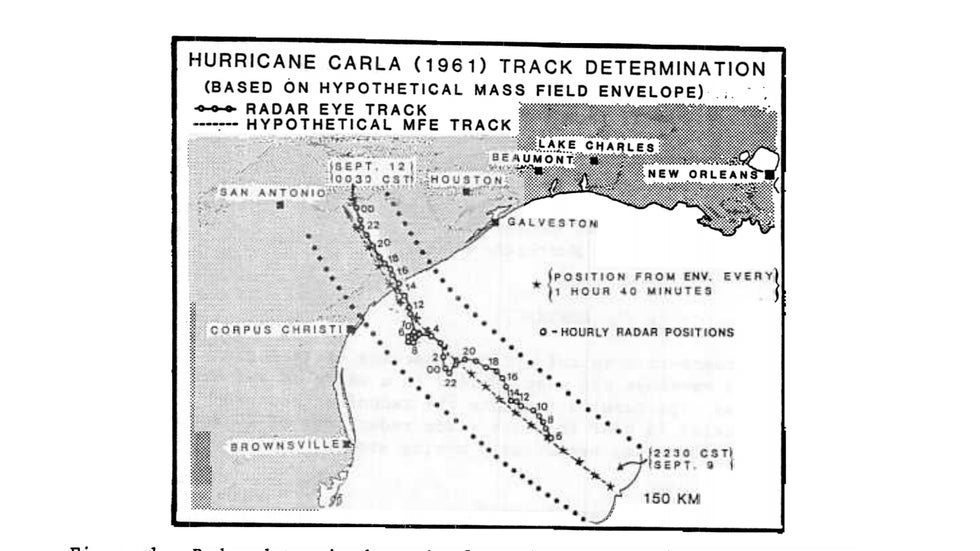 Notice the tracks for Hurricane Carla above, published in a paper by Dr. Bob Sheets (who later became director of the National Hurricane Center). On this map, you see both the likely-more-accurate track of Carla in hollowed-out circles, and then the smoothed, official "best track" in the curving line of stars.

Each one of those wobbles would still be tricky to forecast in the modern era, but probably impossible back in the 1960s.

In this case, Carla's wobbles led forecasters to delay hurricane warnings for the coast as the hurricane danced offshore, producing uncertainty in when and where it would reach land.