Drought monitor analyses showing the expansion of drought, highlighted by the white arrows, over parts of Texas and Oklahoma from July 23 to August 6, 2019.
(USDA, NDMC, NOAA)

A flash drought is spreading in parts of the southern Plains and may worsen in the coming weeks due to persistent hot and dry weather.

While most of the nation remains drought-free, parts of western Oklahoma, the Texas Panhandle, Red River Valley, west-central and Deep South Texas have now slipped into moderate-to-severe drought, according to the August 6 Drought Monitor analysis.

You may think of droughts as slowly-evolving weather phenomena.

But some droughts, known as flash droughts, can develop much faster, on the order of weeks to a few months rather than years, leaving less time to prepare for impacts such as crop losses, reductions in water supply and increased wildfire risk.

Jason Otkin, a drought researcher at the University of Wisconsin-Madison, said he uses at least a two-category worsening in the Drought Monitor over a four-week period or a three-category intensification over an eight-week period, as criteria for a flash drought.

"This region is very susceptible to flash droughts given its location on the east-west transition zone between more arid conditions to the west and the more moist climate to the east," Otkin said.

Rain has been hard to come by in parts of Texas and Oklahoma since the first week of July.

That's not unusual in the southern Plains. By mid-summer, a dome of high pressure aloft typically develops over the area, squelching precipitation chances. August is the driest month of the year on average in Dallas-Ft. Worth, for example.

But the complete lack of rain in some areas over the past few weeks has been impressive. 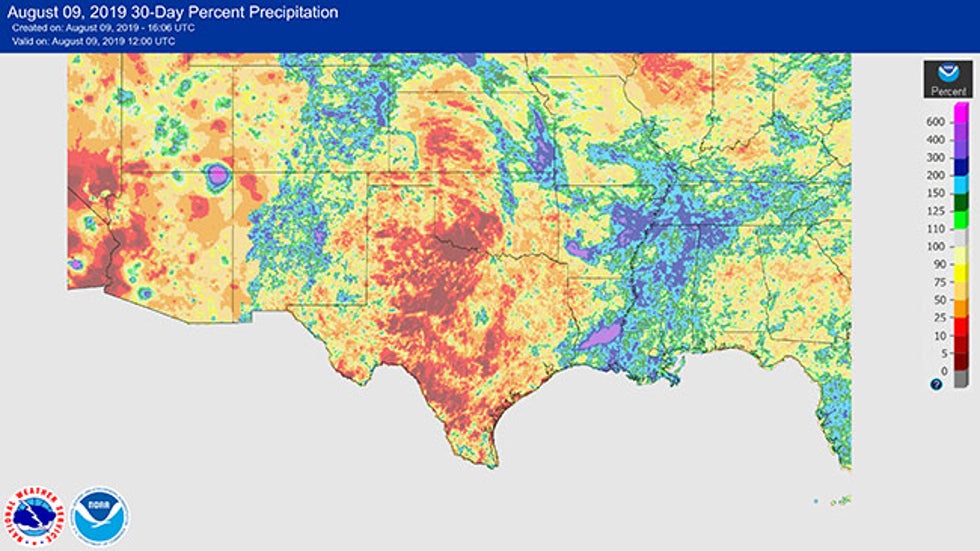 Percent of average precipitation over a 30-day period ending on the morning of August 9, 2019. Areas in darkest red contours have received less than 10 percent of their average rainfall since early July, contributing to the flash drought.
(NOAA/NWS)

Lawton, Oklahoma, snapped its streak of 32 straight days without at least 0.01 inch of rain Friday, but only from a light, 39-minute rain shower. The same 32-day dry streak is still ongoing in Wichita Falls, Texas, through August 8.

No measurable rain fell in July in Del Rio, Texas, and at Austin-Bergstrom International Airport, the first time that has happened at Bergstrom Airport in 76 years of record-keeping.

For a flash drought, moisture also needs to be drawn quickly off vegetation and out of the topsoil into the air, a process known as evapotranspiration.

This is most efficiently done in an extended period of sunny, hot, windy weather with low humidity. In the southern Plains, this happens most often in midsummer, when the sun is high in the sky and the aforementioned upper-level heat dome of high pressure is overhead.

As more moisture is drawn out of the soil, unwatered lawns begin to show brown patches and crop conditions begin to deteriorate.

According to the USDA, topsoil moisture is considered very dry in 61 percent of Oklahoma and 73 percent of Texas as of August 4. A short-term crop moisture index shows excessively- or severely-dry conditions in a large area of Texas, southwest Oklahoma and parts of the Southeast U.S.

Zapata County, Texas, officials asked Gov. Greg Abbott to declare the county in the Rio Grande Valley south of Laredo a disaster area due to the drought.

Outdoor burn bans have been ordered in 92 Texas counties as of August 9 due to the concern for rapidly-spreading wildfires.

Currently, a heat wave is parked over the southern Plains, sending afternoon temperatures soaring above 100 degrees in many locations.

The high-pressure heat dome responsible for this heat wave should also prevent any significant rainfall in much of the Lone Star State and southern Oklahoma for the next several days.

Beyond that, NOAA's 8- to 14-day extended outlook from August 16-22 showed Texas, Oklahoma and the Southwest as having the highest chance of drier-than-average weather. Their experimental outlook through the end of August had a similar dry forecast. 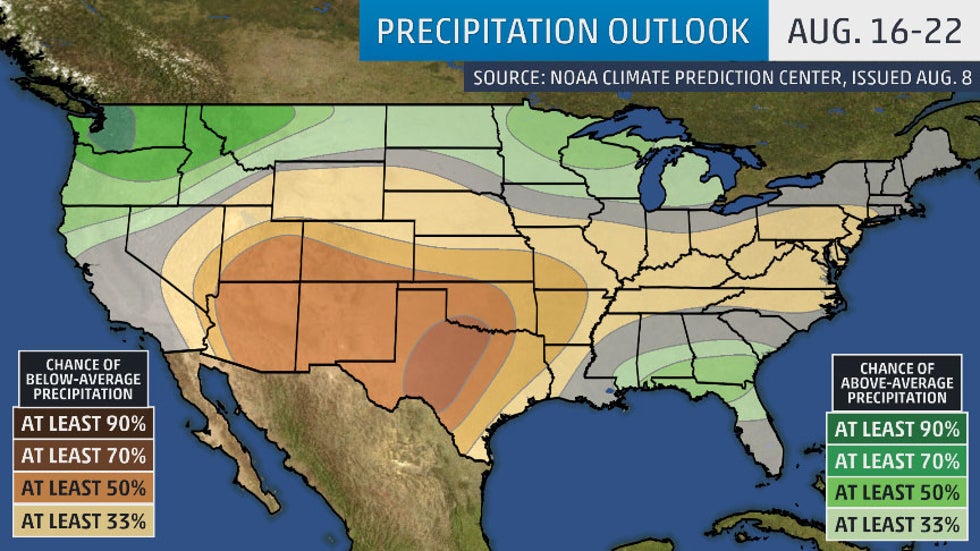 These are nearly ideal conditions for a flash drought to spread.

"This region has experienced several notable flash drought events that developed during the second half of the growing season, most notably in 2000, 2011, and 2012," Otkin said.

By August 2012, large areas of the Plains were in extreme to exceptional drought, a much more expansive area than the current flash drought.

One wild card to this outlook is the potential for tropical systems.

If just one storm, remnant of a storm, or even a tropical disturbance drifts over the southern Plains, a deluge of rain could dent, if not outright wipe out, this flash drought in a matter of days.