A weather pattern sometimes called the "ring of fire" is bringing a searing heat wave to parts of the South while also contributing to periods of rain and thunderstorms that will last into early this week.

Though "ring of fire" isn't a formal weather term, it's sometimes used by meteorologists to describe an occasional summertime weather pattern.

Here's how it works: sinking air associated with a strong upper-level high-pressure system leads to very hot temperatures near its core. Disturbances aloft form a ring around the high's clockwise flow and tap into moisture, resulting in bouts of storms at the system's periphery.

You can see the general setup for the ring-of-fire weather pattern that's been ongoing since late last week from the Southwest to the Plains and Midwest in the graphic below. 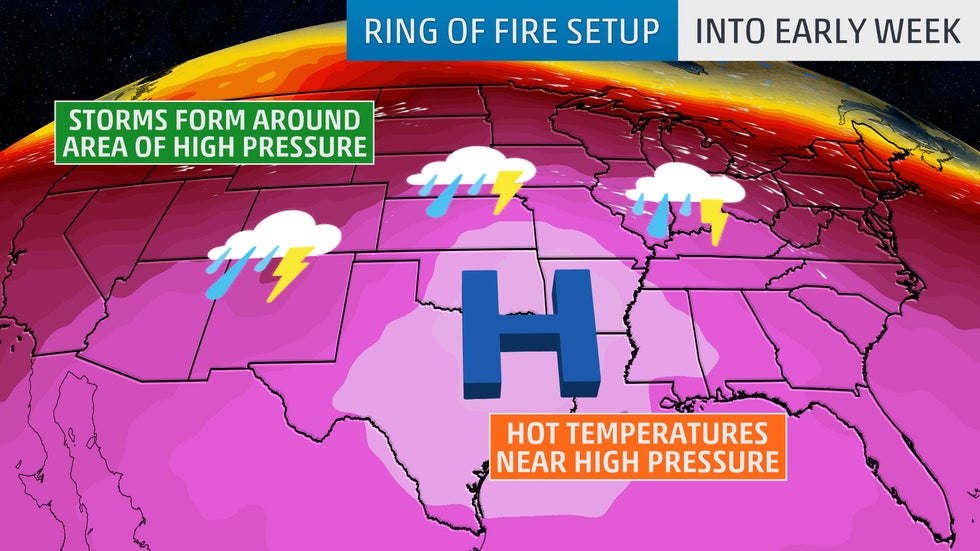 The worst of the heat and humidity from the dome of high pressure will continue over the South into early this week.

Excessive heat warnings have been issued from parts of eastern Oklahoma into the lower Mississippi Valley, where high heat indices could lead to heat-related illnesses such as heat stroke and heat exhaustion.

Heat advisories have also been issued by the National Weather Service to warn about the dangerously hot conditions from the southern Plains eastward into parts of Florida and Georgia.

Dew points will generally be in the 70s, and as a result, some areas under excessive heat warnings and heat advisories could feel like 105 to 115 degrees at times into early this week.

Daily record highs are unlikely to be set, as this is typically the hottest time of the year in parts of Texas and the lower Mississippi Valley.

Widespread daily record-warm low temperatures will likely be set across the South the next several days, with lows mainly in the 70s and lower 80s.

(MORE: Why Nighttime Temperatures Are Also Dangerous During a Heat Wave

Daytime highs in the upper 90s to 100s will be common from Texas and Oklahoma into the lower Mississippi Valley. The Southeast will also see highs in the mid- to upper 90s into early this week.

Some relief from the intense heat will begin to arrive in the South Wednesday or Thursday as the dome of high pressure shifts westward into the southwestern states.

Since late last week, disturbances rotating around the clockwise flow of the high-pressure system have triggered the development of showers and thunderstorms at times from the Southwest into portions of the Plains and Midwest.

On Monday, there is a threat of strong to severe storms in parts of the Plains and Midwest.

Below is our rainfall forecast that shows where there are chances of showers and thunderstorms through early this week.

Rainfall Forecast Though Early This Week