El Niño Has Ended. Here's What That Means.

El Niño has ended and transitioned to a neutral state, potentially opening the door for a more active Atlantic hurricane season.

El Niño exists when average sea-surface temperatures in a region of the central and eastern equatorial Pacific are at least 0.5 degrees Celsius warmer than average for the previous month and last, or are expected to last, for three consecutive months.

Weak El Niño conditions had been in place since fall 2018, but in July, below-average sea surface temperatures emerged in the eastern equatorial Pacific Ocean.

Water temperatures in the central and eastern Pacific along with atmospheric conditions indicate that a transition to a neutral phase has occurred.

ENSO-neutral conditions occur when neither El Niño or La Niña are present. The term ENSO refers to the El Niño/Southern Oscillation, which is a climate pattern that looks at the sea-surface temperatures in the central and eastern Pacific and its interaction with the atmosphere.

There is a 50 to 55 percent chance that neutral conditions will last through the fall and winter, according to the latest outlook from NOAA's Climate Prediction Center.

The guidance from the computer models predict a greater probability, more than 50 percent chance, of neutral conditions remaining in place through the winter. The chance of El Niño conditions developing is around 30 percent, while there is around a 15 percent chance of La Niña occurring. 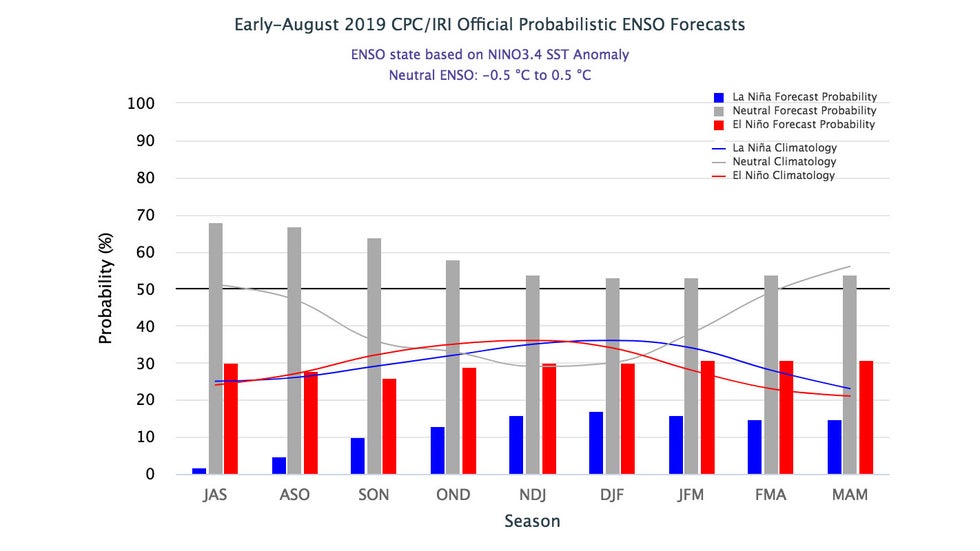 ENSO-neutral conditions are more likely than El NIño or La Niña conditions through the winter.
(NOAA/International Research Institute for Climate and Society)

What Do ENSO-Neutral Conditions Mean for Hurricane Season?

ENSO can impact tropical activity in the Atlantic and eastern Pacific due to its interactions with the atmosphere.

In general, wind shear, the change in wind direction and/or speed with height, is stronger in the Atlantic Basin in El Niño hurricane season. Wind shear tends to reduce the number of named storms and hurricanes. In addition, there is often more sinking air in portions of the basin and sinking air is hostile to tropical cyclone development.

Conversely, when La Niña is observed, wind shear is stronger in the eastern Pacific, limiting the number of named storms and hurricanes. In addition, wind shear and instability tend to be more favorable for tropical development in parts of the Atlantic and Caribbean.

Interestingly, in ENSO-neutral years, the number of named storms and hurricanes is similar to La Niña years, based on data from 1995 through 2016 from NOAA.

(MORE: Here's When the Atlantic Hurricane Season Typically Ramps Up

Tropical activity in the Atlantic in La Niña and ENSO-neutral years tends to be above average. The 30-year average is 12 named storms, 6 hurricanes and 3 major hurricanes (Category 3 or higher). 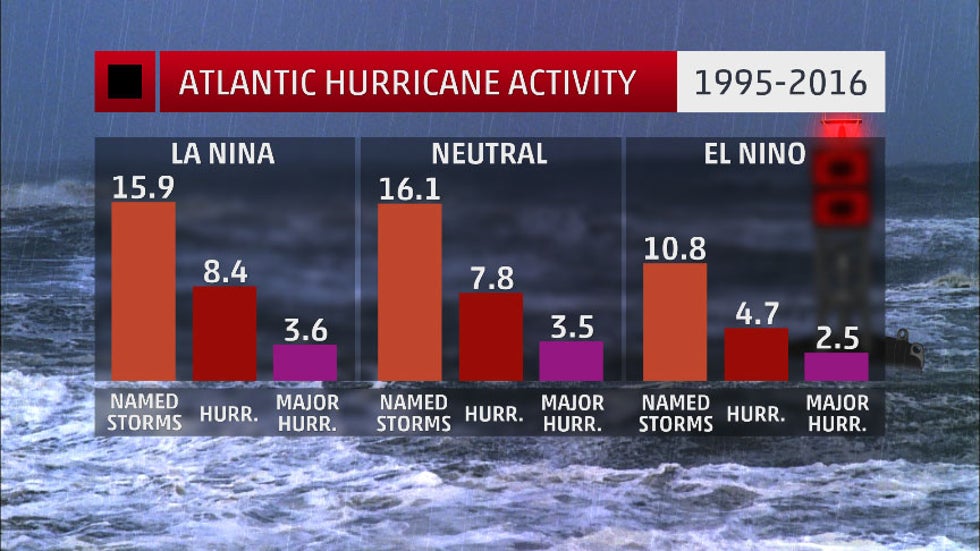 La Niña and ENSO-neutral years have generally seen more named storms and hurricanes in the Atlantic, based on data from 1995-2016.
(Data from NOAA/CPC)

It is also important to remember that factors other than wind shear influence hurricane activity. These include water temperatures, the number of tropical waves off Africa and how much dry air comes into the Atlantic from the Sahara.