The 2019 Atlantic hurricane season is now more likely to produce an above-average number of hurricanes and tropical storms, according to an updated outlook released Thursday by NOAA's Climate Prediction Center.

The 30-year average (1981-2010) is 12 named storms, six hurricanes and three major hurricanes. A major hurricane is one that is Category 3 or stronger on the Saffir-Simpson Hurricane Wind Scale. 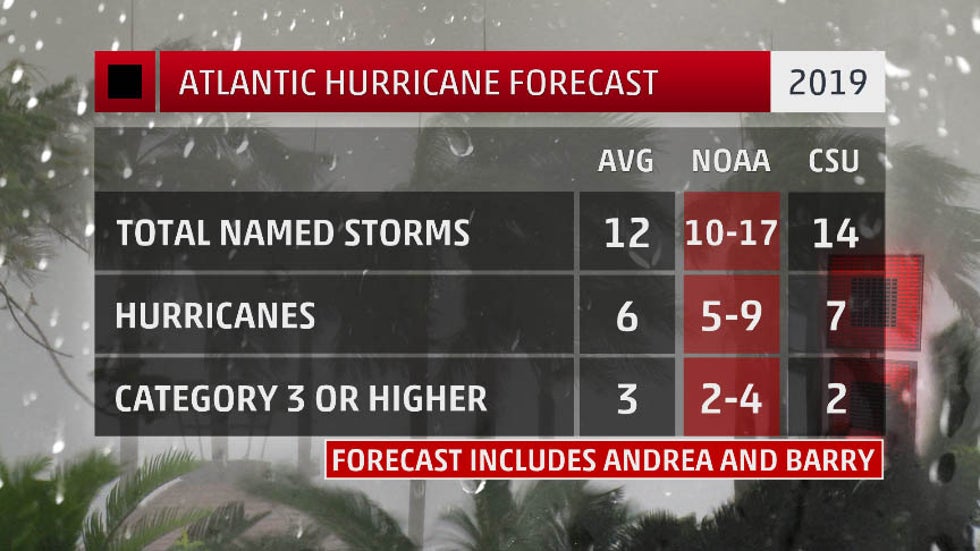 Numbers of Atlantic Basin named storms (those that attain at least tropical or subtropical storm strength), hurricanes and hurricanes of Category 3 intensity forecast by NOAA and Colorado State University compared to the 30-year average.
(Note: The outlooks include Andrea and Barry, which formed earlier in the hurricane season.)

NOAA indicated that oceanic and atmospheric conditions are now more favorable for above-average hurricane activity in the Atlantic Basin because El Niño had officially ended as of Thursday, when the final El Niño advisory was issued.

(MORE: El Niño Has Ended; Here's What That Means

El Niño tends to yield a less active hurricane season than average because of increased wind shear – the change in wind speed with height – in the Atlantic Ocean. Wind shear is detrimental to the development and maintenance of tropical cyclones.

"This evolution, combined with the more conducive conditions associated with the ongoing high-activity era for Atlantic hurricanes that began in 1995, increases the likelihood of above-normal activity this year."

(MORE: Here's When the Atlantic Hurricane Season Typically Ramps Up

Colorado State University noted in its updated outlook that "current conditions in the tropical Atlantic and Caribbean present mixed signals for the remainder of the season."

This is because even though El Niño conditions have disappeared, the lingering warm waters in the central tropical Pacific will likely last over the next couple of months, and that could prevent upper-level winds in the tropical Atlantic and Caribbean from becoming too favorable for hurricane development.

Here are some questions and answers about what these outlooks mean.

What Does This Mean for the United States?

There is no strong correlation between the number of storms or hurricanes and United States landfalls in any given season. This year's first U.S. landfall came with Hurricane Barry in July. Barry's formation is taken into account in the NOAA seasonal outlook, along with short-lived Tropical Storm Andrea from May.

Of the 10 to 17 total named storms predicted to develop this season, one or more additional storms could hit the U.S., or none could. That's why residents of the coastal United States should prepare each year no matter the forecast.

The 1992 and 1983 hurricane seasons are visceral examples of why you need to be prepared regardless of the seasonal forecast.

The 1992 season produced only six named storms and one unnamed subtropical storm. However, one of those named storms was Hurricane Andrew, which devastated South Florida as a Category 5 hurricane.

In 1983, there were only four named storms, but one of them was Alicia. The Category 3 hurricane hit the Houston/Galveston, Texas, area and caused some $3 billion in damage, taking more than a dozen lives.

In contrast, the 2010 Atlantic hurricane season was quite active, with 19 named storms and 12 hurricanes. Despite the large number of storms that year, not a single hurricane and only one tropical storm made landfall in the U.S.

In other words, a season can deliver many storms but have little impact, or deliver few storms but with major impacts.

Named storm tracks in the 2018 Atlantic hurricane season. The colors correspond to intensities of each named storm during that section of the track, except for the black sections, which correspond to either a remnant or the time during which a system was a tropical wave before forming into a depression or storm.

The U.S. averages one to two hurricane landfalls each season, according to NOAA's Hurricane Research Division statistics.

The past two hurricane seasons have been particularly destructive.

In 2018, four named storms impacted the U.S. coast, most notably hurricanes Florence and Michael within a month of each other.

In 2016, five named storms impacted the southeastern U.S. coast. The most notable of the bunch was Hurricane Matthew, with its powerful scraping of the coast and subsequent inland rainfall flooding.

In the past three seasons, eight hurricanes were so destructive and/or deadly their names were retired from further use by the World Meteorological Organization.

The number of U.S. landfalls had been well below average over the previous 10 years before these seasons.

What's more, none of the U.S. landfalls from 2006 through 2016 involved major hurricanes, the longest such streak on record.

Bottom line: it's impossible to know for certain if a U.S. hurricane strike, or multiple strikes, will occur this season. Keep in mind, however, that even a weak tropical storm hitting the U.S. can cause major impacts, particularly if it moves slowly and produces flooding rainfall. 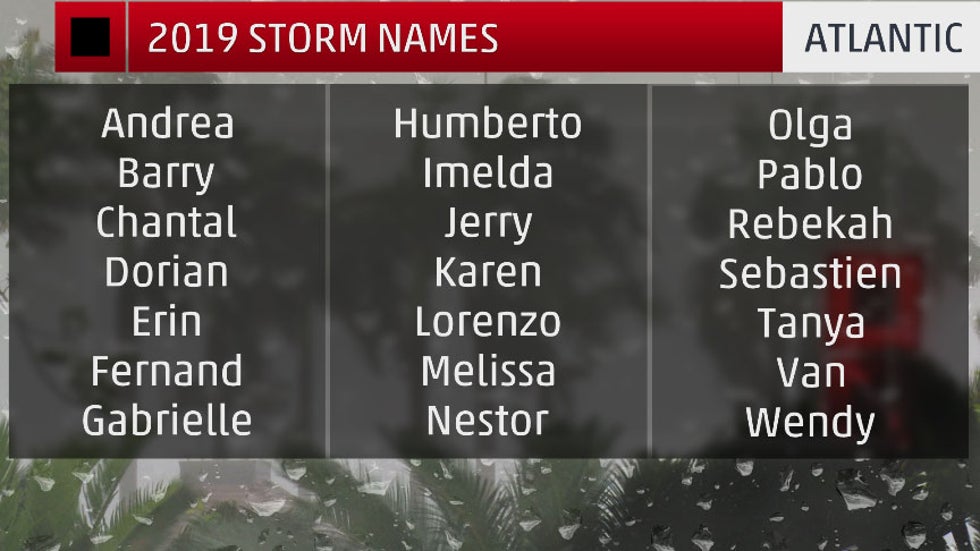 The Weather Company, an IBM Business, surveyed 2,200 adults across the United States and gained some interesting insights about Americans and hurricane season.

-Americans believe the weather has gotten more severe, but four in 10 have no plans to handle an emergency.

-Only 31% of Americans said they would always evacuate if ordered to do so.

-Only 16% of Americans have a preparedness kit packed in preparation for a severe weather event.

This article provides a list of tips to help you prepare for a hurricane. Some of them could end up saving your life.