U.S. Still on Pace for a Record Wet Year, Despite a Near-Average July 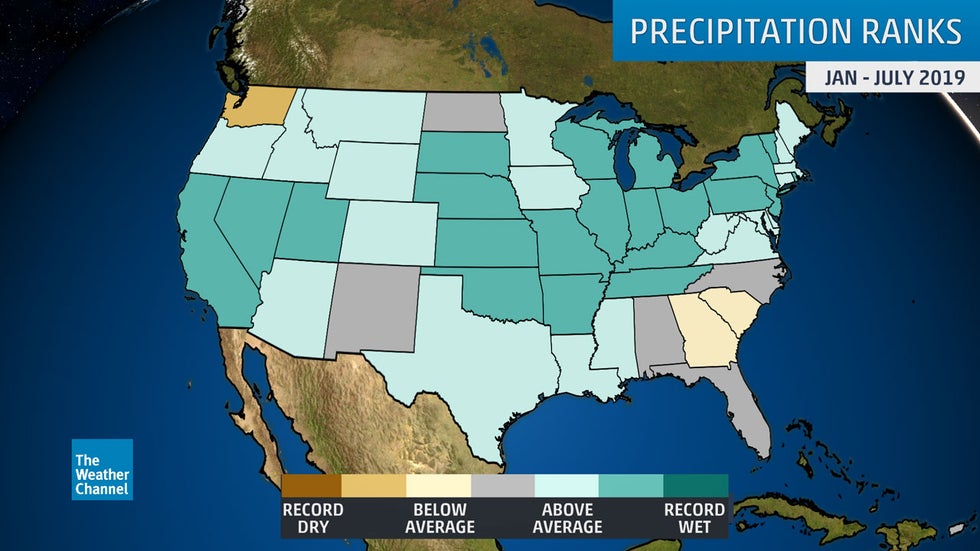 The various shadings denote the statewide precipitation rankings for the U.S. from January through July 2019.
(NOAA/NCEI)

January through July 2019 was the wettest such period in the U.S. on record, keeping the country on track to see the wettest year on record.

This record was set despite July experiencing near-average precipitation, the first month this year to do so.

The national climate report from NOAA's National Centers for Environmental Information (NCEI) said the year-to-date precipitation total for the Lower 48 was 21.79 inches, which is 3.70 inches above average.

It was also the record wettest August-through-July period in the 125-year record, with 37.73 inches, and the second wettest among all 12-month periods. The wettest of any 12-month period was just set from July 2018 through June 2019, which observed 37.90 inches of precipitation.

(MORE: The U.S. Just Had Its Wettest 12 Months on Record

Much of the country has seen much-above average precipitation so far this year and the region stretching from Missouri to Ohio, West Virginia and Tennessee set a record for wettest year-to-date. The excessive precipitation led to record-long flooding along parts of the Mississippi River this year.

When looking at regions, the wettest August through July on record was set from New England through the Midwest and into the southern Plains.

Alaska saw its hottest month on record in July, based on records since 1925, with an average temperature of 58.1 degrees. This was 5.4 degrees above average and 0.8 degrees warmer than the previous warmest month, which was July 2004.

It was also the second warmest year-to-date on record for Alaska, with average temperature of 33.3 degrees, which is an impressive 7.5 degrees warmer than average.

(MORE: July 2019 Was the Hottest Month on Record in Alaska and Parts of New England

Above-average temperatures were also recorded in much of the East and Southwest in July. Connecticut and Rhode Island saw their third warmest July on record. It was one of the top-five warmest Julys on record for Massachusetts and New Jersey.

Cooler-than-average temperatures have prevailed year-to-date in parts of the Plains and upper Midwest.