Hurricane Charley Kicked Off the Costliest Stretch of U.S. Hurricanes 15 Years Ago

Hurricane Charley tore through the Florida Peninsula 15 years ago this Tuesday, setting off a stretch of 21 particularly devastating U.S. hurricane strikes responsible for more than 4,500 deaths and $771 billion in damage.

It's a 15-year stretch that's upended hurricane history, and it all started with Charley.

After it gave the Tampa-St. Petersburg metro area a scare, Charley made a rightward bend and made landfall near Ft. Myers, Florida, on August 13, 2004, as a Category 4 hurricane with winds up to 150 mph.

Despite its small size, Charley left behind a trail of wind damage resembling a very large tornado from Punta Gorda and Port Charlotte in southwest Florida, to Orlando and Daytona Beach as it raced across the Florida Peninsula in just seven hours. 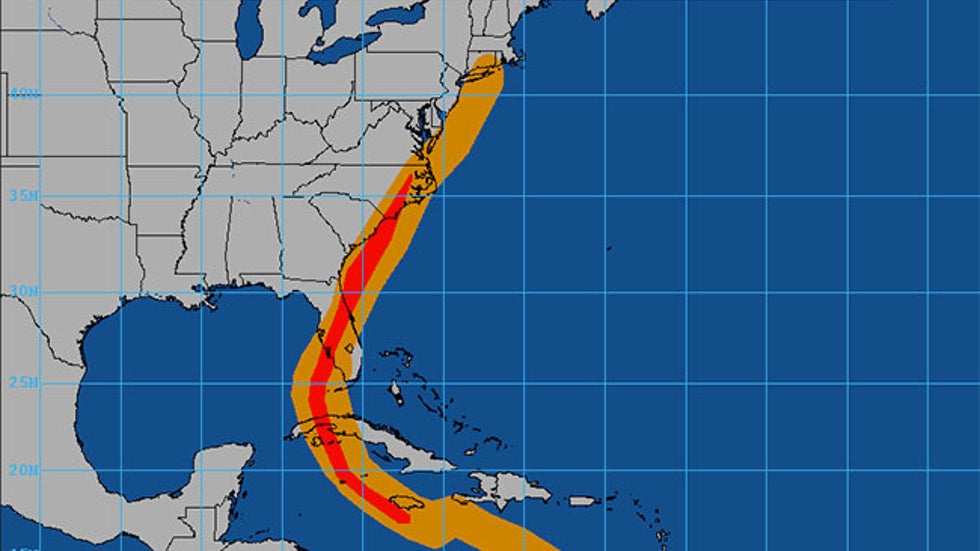 At the time, Charley was the second costliest U.S. hurricane. Adjusted for inflation, Charley was responsible for an estimated $22 billion damage in the U.S., according to NOAA.

Little did anyone know, Charley would be merely the first chapter in the most destructive 15-year stretch of hurricane strikes in U.S. history.

The Saga After Charley

Three other hurricanes in 2005 - Dennis, Rita and Wilma - also were multi-billion dollar disasters.

In late November 2005, the National Hurricane Center's big board showed the list of the 2005 Atlantic named storms. The NHC had to use names from the Greek alphabet for the first time in 2005, after it exhausted the season's entire name list. An unnamed subtropical storm was later found in post-analysis, which bumped up the season's total to 28 storms.
(AP Photo)

Irene, Lee and Sandy then took their toll on the East in 2011 and 2012, mainly from either storm surge or massive inland rainfall flooding.

This siege was capped off by a two-year stretch from October 2016 through October 2018 of six hurricane landfalls in the U.S. or Puerto Rico - Matthew, Harvey, Irma, Maria, Florence and Michael.

Estimates suggest around 3,000 were killed in Puerto Rico from Hurricane Maria in 2017, the deadliest U.S. hurricane since the Galveston Hurricane of 1900 claimed at least 8,000 lives.

Tracks and landfall locations of 21 U.S. and Puerto Rico hurricanes and tropical storms that have produced an estimated $1 billion or more, from Hurricane Charley in 2004 through Hurricane Michael in 2018.
(Data: NOAA-NCEI)

Not every year in this 15-year stretch was frenetic.

Five of those years - 2006, 2009, 2010, 2013 and 2015 - had no continental U.S. hurricane landfalls. Hurricanes Alex and Earl in 2010 took distant swipes at South Texas and North Carolina's Outer Banks, respectively. Distant Hurricane Joaquin had an indirect influence on the massive South Carolina flood of 2015, as well.

What's more, there were no major landfalls (Category 3 or greater) between Wilma in October 2005 and Harvey in August 2017 – a record-long stretch of nearly 12 years. Yet the "non-major" landfalls in between, such as Ike and Sandy, remind us that storm surge can produce billions in damage even if a hurricane's winds aren't at Category 3 strength.

This includes the top five costliest hurricanes in U.S. history, and nine of the top 10 costliest storms. Only Andrew in 1992 remained in the top 10 list after this latest 15-year siege. 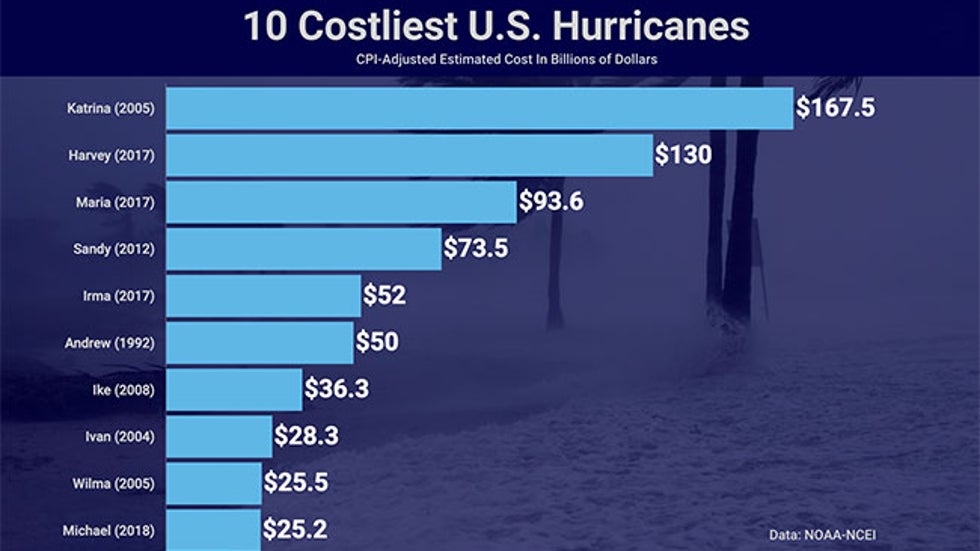 The 10 costliest hurricanes in U.S. history, according to damage estimates adjusted for inflation to 2018. (Note: Sandy did not landfall in the U.S. as a hurricane, but rather as a post-tropical cyclone. However, its damage was largely due to its development into a large hurricane prior to landfall.)
(NOAA-NCEI)

The total price tag from these 21 storms was $771 billion, just over three-quarters of a trillion dollars.

Damage from these 21 storms made up 65% of all losses from billion-dollar weather disasters in the U.S. from 2004 through 2018, according to NOAA.

Nineteen of those billion-dollar storms had their names retired from future use because they were so deadly and/or destructive.

According to the National Hurricane Center, 4,833 total U.S. deaths were directly attributable to these 21 storms, primarily from Katrina (at least 1,500 killed) and Maria (2,981 killed).

Number of U.S. Strikes Not Unusual

Despite the massive toll, the number of hurricanes that struck the U.S. hasn't been unusually high.

A total of 26 hurricanes struck the continental U.S. from Charley in 2004 through 2018. According to statistics compiled by the National Hurricane Center, the long-term average number of hurricanes to strike the mainland U.S. for any 15-year period is about 27. 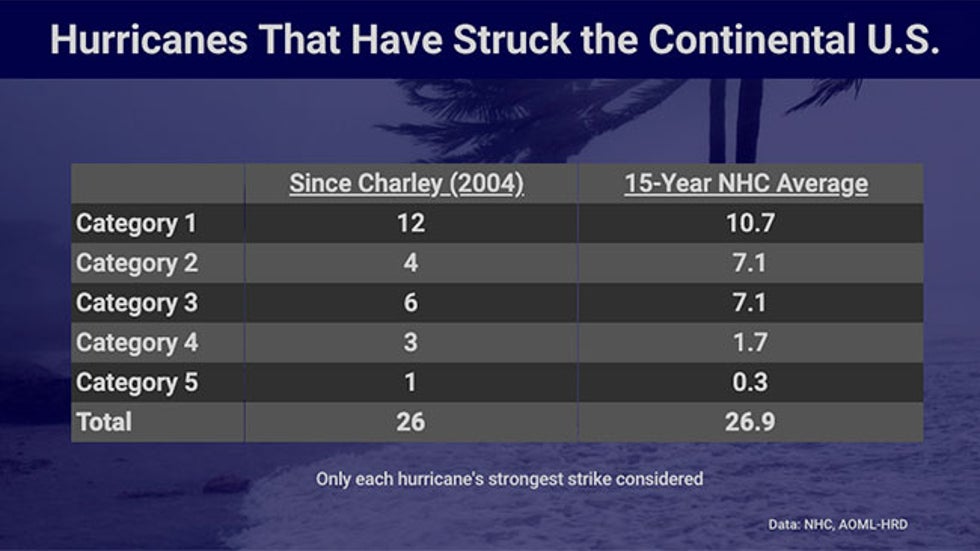 The number of hurricanes that struck the U.S. from Charley in 2004 through 2018 has been about average. (Note: Only each hurricane's strongest strike is counted, not multiple strikes along its path.)
(NHC, AOML-HRD)

A hurricane "strike" means any hurricane that produces hurricane-force winds on land, regardless of whether the hurricane actually makes landfall. In this case, Superstorm Sandy in 2012 and Hurricane Ophelia in 2005 both counted as hurricane strikes, even though neither made landfall as a hurricane.

Despite the total number of strikes being near average, there has been an extremely rare Category 5 strike (Michael 2018), almost double the average number of Category 4 strikes and about one more Category 1 strike than usual.

How damaging and deadly a tropical cyclone is depends on its size, intensity, how fast it moves and where it hits.

Over the last 15 years, the U.S. has had a number of large, intense hurricanes strike highly-populated areas with rainfall flooding, surge flooding and high winds.