Cooler temperatures and lower humidity will arrive in the Midwest and Northeast later this week as a weather pattern change takes shape across the United States.

A blocking high-pressure system in the upper levels of the atmosphere is setting up near Greenland. When this happens, the jet stream takes a southward plunge over parts of the eastern U.S., allowing cool, dry Canadian air to filter into the region and suppressing the heat and humidity to the south. This pattern is known as the negative phase of the North Atlantic Oscillation, or NAO.

A negative NAO typically correlates with cooler-than-average temperatures across the northern U.S. and parts of the West, while Texas and much of the southern U.S. are usually hotter than average. This is the general temperature regime that we expect late this week and into the weekend. 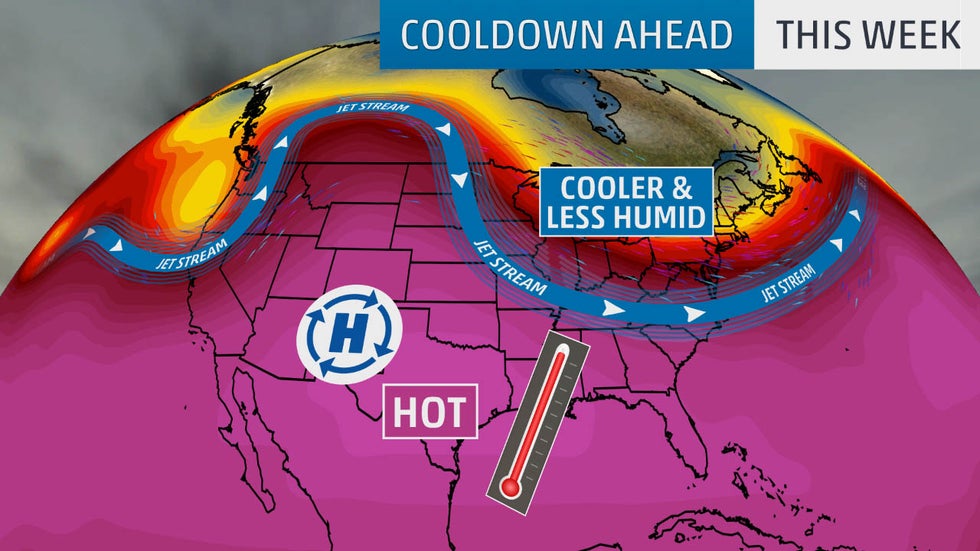 The jet stream will plunge southward over the Midwest and Northeast later this week, allowing cooler, less-humid air to filter in from the north as heat and humidity are suppressed to the south.

This pattern change will drive a cold front southward through much of the Plains, Midwest, Great Lakes, Northeast and mid-Atlantic during the second half of this week. That front may stall over the central Plains by this weekend after pushing unusually far into the South by August standards.

High temperatures will likely hold in the 70s at times across the northern tier of states late-week into this weekend, with a few locations along the Canadian border struggling to make it out of the upper 60s. Highs should still manage to hit the 80s along the Interstate 95 corridor in the Northeast, as well as in much of the Ohio Valley and lower Midwest.

These readings are about 5 to 10 degrees below average for this time of year, with some parts of the northern and central Plains as much as 15 degrees cooler than average.

Dew points should dip into the 40s and 50s, which indicate very dry air for late summer. Because of the low humidity, low temperatures may cool into the 50s and 60s from the Midwest to the Northeast, with perhaps even some 40s near the Canadian border. Don't be surprised if the air has a fall-like feel, especially at night and in the early-morning hours.

The relatively cool conditions may persist across much of the country's northern tier into next week as well, according to long-range forecasts.

Any heat and humidity are expected to be confined to the southern tier of the nation through much of next week.